Behind the Work 1.5k Add to collection 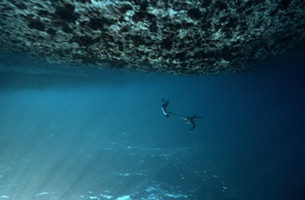 Earlier this year Forever Pictures’ Charlie Robins wowed us with his leg-wobblingly brilliant, free-climbing promo for Klangkarussell’s ‘Netzwerk’ (which featured in the 2015 Saatchi & Saatchi new Directors Showcase). And the director has again explored the world of extreme sports, bringing in free-diving world champion Guillaume Nery and his filmmaking partner - who is also a fellow free-diver - Julie Gautier, for Naughty Boy’s Runnin’ with Beyoncé. The film tells a dreamy underwater love story and was shot off the coast of a tiny island in French Polynesia, which proved the perfect setting. Its crystal clear, shallow waters allowed the sun to naturally light the whole production. LBB’s Addison Capper chatted with director Robins to find out exactly how he did it.

LBB> What inspired the underwater concept for Runnin’? What made you want to make a film underwater in the first place?

CR> James Hackett (the commissioner) wanted a video with a sense of adventure. I had seen an incredible video online by Julie Gautier [filmmaker and free-diver] and Guillaume Nery [French free-diving champion] called Ocean Gravity (check that out further down the page) which totally inspired me. I wrote to them asking if they wanted to collaborate on a project and that’s how it started.

CR> We shot entirely underwater off the coast of a tiny island near Tahiti in French Polynesia called Rangiroa. Paradise.

LBB> How tricky was it devising the camera movements to achieve the effects you wanted? What tricks and techniques did you have to use?

CR> No tricks. Just lots of preparation, story boarding and discussions. We shot in a drift current which flowed through the lagoon for two hours everyday which gave us the illusion of forward momentum you see in the video.

LBB> Who did you work with on the camerawork?

CR> The DOP was Jaques Ballard. He was amazing and an underwater supremo, perfect for the job. A risk taker with a great eye. His assistant Arthur Lauters was a massive help and often went beyond the call of duty in order to achieve the shots.

LBB> What added challenges does an underwater shoot like this bring up?

CR> The main challenge when shooting underwater is always the time. We had four days to shoot but chasing the daylight during winter season in French Polynesia was hard. The sunset at 5pm and night swimming isn’t particularly safe given the sharks and giant manta rays floating very nearby.

It's such hard work in the water as you are constantly moving every part of your body. Standing still is not an option. The current is also known to be quite temperamental. We got pretty lucky with it but at any point it could have decided to drag anyone of us away had we not had an amazing safety team run by Katie Corvoille.

LBB? Who are the two people in the film and how did you find them? Why were they right for the job?

CR> The two divers you see are world champions Guillaume Nery and Alice Modolo. They were perfect for the job. The whole thing was based on the films that Guillaume and his partner Julie had made initially so it all made sense to work with them. They are the best of the best.

LBB> What kind of conversations were you having with them? Were your instructions quite structured or was it more a case of letting them flow more freely?

CR> I worked in collaboration with Julie Gaultier. She was an unbelievable force of nature in the water and I couldn't have communicated anything on set without her. It would be a case of discussing shot lists before we got in the water and then ticking them off as we went along. Julie was up and down in the sea like a duck, orchestrating everything with precision and care.

LBB> What were they kitted with to ensure they stayed underwater but could also move around?

CR> They had a few weights in pockets etc. but to be honest it was mostly done by controlled breathing exercises and careful planning from the safety team who would escort them down and swim out of shot. We would roll camera for about 45 seconds at a time.

LBB> How long were you shooting for?

We were out there for eight days, shooting for four.

CR> I'm not just saying this but every moment was special. Witnessing the amazing talents of the team was something I’ll never forget. You think seeing it on a screen is incredible, try diving with them! Breath taking.

LBB> You’ve scaled heights for Klangkarussell and have now headed underwater for Naughty Boy… what’s up next?

CR> I just came back from the desert in LA. It's a place called The Salton Sea. I shot a performance video with a great new artist in a baron wasteland in 109 degree heat. FUN.

LBB> Anything else we should know about the film?

CR> PIXAR studios have gotten in touch to say they love it. I can die happy.