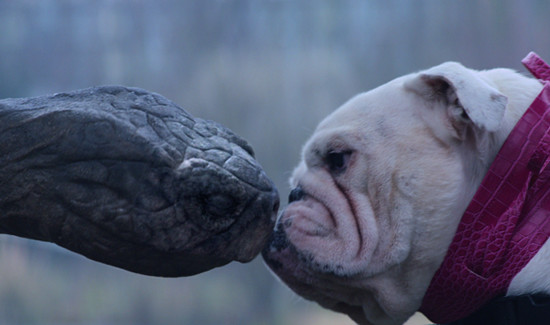 21st century dating is a complicated old business. Just ask Arthur, the star of the new trailer for Channel 4’s ‘Mating Season’ collection of shows. The ageing lothario, who was brought to life by 4Creative, MPC London and Asylum, is doing his bit to get over the death of his lifelong partner. Oh, and did we mention he’s a tortoise? The resulting spot is a real heart-twitcher as our reptilian friend goes on a heap of hapless dates and ends up on an epic, handcuffed night out, before finding love and feeling fuzzy-headed the morning after. Yeah, we wanted to find out more too. 4Creative Creative Directors (and directors of the film), Chris Bovill and John Allison, and MPC VFX Supervisor, Michael Gregory enlighten us.

LBB> So, first question - why did you choose a tortoise as the protagonist of the film?

CB&JA> We wanted to dramatise how complicated the dating landscape is these days, so we took someone from the dinner and dance era. Obviously it had to be a tortoise because they mate for life and because visually it heightens the fish/tortoise out of water idea. Arthur is an old recently bereaved man looking for love. You empathise with him, you want him to get lucky and you're happy when he does. Everyone has been through what Arthur endures to some degree.

CB&JA>  Massive. We wanted to capture as much of Arthur in camera as possible. We wanted all the characters to be able to interact with him and for him to get freaked out by their gestures and crazy full on modern dating ways. Asylum built an incredible Arthur – it was terrifyingly real. When we first met the puppet Arthur it was very unsettling. MPC also built an amazing Arthur face and head. We all worked closely together to make sure the two would come together beautifully in post-production.

LBB> What was the shoot like as a whole? What were the key challenges you faced and how did you overcome them?

LBB> How closely did you work with the team at MPC to capture the aesthetic of the film?

CB&JA> Asylum, MPC and 4Creative were like a creative ménage- à-trois the whole way through. We were all over each other. Once MPC added the eyes, the eyebrows and the facial movements and all their other magic he literally came alive. The finished result is a weird, beautiful three-way love child.

LBB> What can we look forward to from Mating Season on Channel 4?

CB&JA> Channel 4’s mating season explores the complexities and nuances of forming relationships in 2013 with a collection of drama and documentaries that take a look at modern day relationships. Programmes include an original nine-part drama from the maker of Skins, Brian Elsey, new fixed-rig interactive documentary First Dates and the insightful How to Find Love Online and Why Am I Still Single?

LBB> What kind of brief did 4Creative initially approach you with and what were your immediate thoughts when you saw it?

MG> The brief was to create Arthur, a giant tortoise. Like always, my immediate thoughts were: what’s the best way to do this? Full CG, model, real, or half and half?

LBB> How much and what kind of research did you have to undertake regarding the tortoise and its character design?

MG> We researched and sourced images and footage of tortoises, creating a very useful library of references. Then we took it into concept/look development and put Arthur into some of the environments that Chris and John had storyboarded. Coming out of the glory hole. Walking down dark alleys. Chatting up dogs. You know, everyday tortoise stuff. The model makers at Asylum based the final model of Arthur on these detailed references and concept work, put together by our in-house designers.

LBB> From a practical point of view, what are tortoises like work to with, compared to other animals and textures?

MG> Well their skin has an amazing texture – it's been outside for 130 years – and the dirt, cracks, scales all add to his age. We spent 20 days matte painting the textures of the skin and shell alone.

LBB> What were the in-camera elements? How much of the film is shot in camera and how much was done in post?

MG> We shot the full scale model in camera with various different rigs.  We then helped age Arthur by projecting new textures onto his legs and shell, and of course a CG head. On the wide shots we replaced the legs and lower body.

LBB> It must be pretty difficult  for a tortoise to look shocked and surprised - how did you go about achieving this in the dating scene?

MG> We firstly looked at applying a reptile or tortoise eye movement, which is when the bottom lid closes by itself. Then we tried the expressions using a human eyelid movement, with both lids closing at the same time. It was really interesting to see the difference this made – you automatically feel a stronger connection to Arthur when he is humanized like this. In the dating scene, we needed to utilize the human eyelid movement again because tortoises aren't capable of widening their eyes, like we see in the shot.

LBB> How closely did you work with directors Chris Bovill and John Allison to get the aesthetic of the film right?

MG> We had quite a few meetings up front so we knew exactly what they wanted prior to shooting. Apart from the VFX we also talked about looks, grades and which lenses we'd shoot on.  We collaborated closely with them throughout so there were no surprises later on.

It was fantastic to work with such impressive creatives for the first time-the idea behind the spot is absolutely brilliant. I really look forward to working with them again. Chris and John gave us animation notes for the expression in each of the shots. We'd then go through various animation changes until we had it just right. I think we had perhaps 20 animation changes on the glory hole, eventually we really exaggerated the roundness of his eyes and held the wide eye pose for a few extra frames to make sure he looked as anxious as possible.

LBB> What were the most challenging aspects of this project and how did you overcome them?

MG> Well, anamorphic lenses always add a few more challenges. They create extra distortion and lens artifacts that you don't get so much when shooting spherical. Object tracking the head proved tricky in certain shots. We also had a lot of lens flares and flashing lights to deal with, especially in the club scene.