Oli Beale, Partner and ECD at Anomaly, on the challenges of bringing ‘Live From The Inside’ to British TV screens 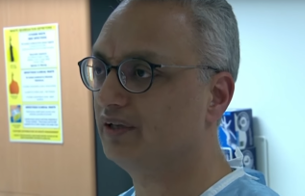 Yesterday, Cancer Research UK, Channel 4 and ad agency Anomaly collaborated to produce a world first on live television. As part of CRUK’s ‘Right Now’ campaign, which launched on Boxing Day and aims to show the reality of day-to-day life for those affected by cancer, a live colonoscopy was aired during an ad break on Channel 4. ‘Live From The Inside’ provided viewers with the unique opportunity to see the removal of bowel polyps from a camera linked to a flexible tube called a colonoscopy. While most polyps don’t develop into cancer, some do, therefore removing them can help prevent bowel cancer developing.

LBB’s Addison Capper chatted with Oli Beale, Partner and ECD at Anomaly, to find out more...

LBB> To some people, the film could seem quite graphic - did you have any trouble getting this approved to be broadcast on TV?

OB> There was no trouble but we had to be so careful. There were warnings beforehand and Clearcast were present at the shoot to make sure we didn't go mental.

LBB> What did the live aspect add to this campaign that couldn’t have been achieved by filming and traditionally broadcasting?

OB> It's the purest expression we've had so far of the idea that cancer is happening RIGHT NOW.

LBB> Is there a reason you chose this specific procedure?

OB> As procedures go, this one is quite low risk. It's also quite predictable as it's done a lot.

LBB> What kind of research and planning had to happen to make this a reality?

OB> So much. It took a year. A lot of work with the doctor. I don't think anybody other that Channel 4 could have made this happen. Facebook bent over backwards to get it live too.

LBB> Technically, how tricky a task is it to transmit that specific camera to TVs live? How does it work?

OB> Channel 4 and Sassy (the live production company) took care of all that. It's very difficult but they are masters of it.

LBB> What kind of reaction have you seen since it was aired?

OB> Incredible. It has been global news, but the comments from people that are going through cancer or have been through cancer, talking about how much research had changed their lives, are the most moving reactions.

LBB> What were the trickiest aspects and how did you overcome them?

OB> The whole thing was tricky. It started as impossible and we slowly chipped away until it was possible. It was a huge team effort led by our brave clients.