Behind the Work 386 Add to collection 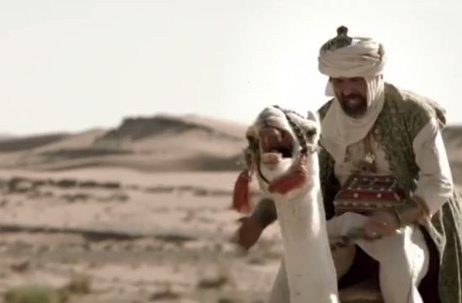 BETC Paris and Canal+ are well on their way to becoming one of the great love affairs of global advertising. It’s a relationship that has produced award-winning work and is set to see the brand named Advertiser of the Year at this week’s Eurobest. When their latest campaign dropped in our inboxes we thought Christmas had come early. LBB’s Addison Capper spoke to creative director Olivier Apers to find out more.

LBB> What was the brief like that Canal+ initially presented you with? What were your thoughts when you saw it?

OA> The brief was to create a Christmas campaign that would highlight the channel’s holiday programming. We get the same brief every year and it’s a bit of a tricky one. It’s an important one though, as CANAL+ gets almost 40% of its new subscribers around Christmas time. In previous years the brief has resulted in more traditional trailers promoting the upcoming programming. However, this year both CANAL+ and we felt that it was time for a real TVC with a bit of a twist.

LBB> How did you arrive at the final idea of an alternative spin on the Nativity story?

OA> We wanted to highlight everything CANAL+ has to offer for the holidays. At one stage, we even completely dropped the Christmas theme as the scripts had a tendency to get too focused around it. It was when we looked for stories of how viewers get completely captured by CANAL+ that we drew the parallel with the nativity scene, how everyone gathers around the great event...

LBB> Were you worried the faux Nativity concept could upset some people?

OA> Sure, we did ask ourselves whether it was a good idea or not to play with religion and re-write history. But then, CANAL+ is quite a legitimate brand to do so – to twist the truth is one of the strengths of a good storyteller. In a way it’s what we did in the CANAL+ ad “The Closet” from 2009 – the story of a wife, a husband and a lover in a closet is a classic one, here in a new version.

LBB> Despite its humour, at the heart of the story is the comfort of watching television with family at Christmas - what was the reasoning behind making this the focal point?

OA> The challenge of the film was to not just show a happy family in front of the telly but to truly (yet cheeky) show how capturing and entertaining the shows on the channel are. In the film, everyone’s glued by the TV screen -  including the ox and the donkey.

LBB> Canal+ was recently named Eurobest's Advertiser of the Year and 'The Bear' was awarded a Grand Prix at Cannes 2012 - why do you think the BETC-Canal+ relationship is such a successful one?

OA> When an expert in storytelling meets a creativity lover and they both have high standards, it leads to brave and smart campaigns, in perfect synergy with the content of the channel.

LBB>What were the biggest challenges during the film's conception and how did you overcome them?

OA> We had to create a story that was new and surprising on a theme where it seemed like everything already had been done. The biggest challenge was to dare to step away from the traditional Christmas theme and create something that would stand out among the jingle bells, Santas and snowflakes.

Then of course, as always with CANAL+, the production and crafting is challenging. We always strive for a top quality since every ad we make for CANAL+ has to be like a sample of what’s available on the channel and keep the same high level both in terms of craft and entertainment.