Your Shot: Bringing to Life the Future of Channel 4, Alan Carr, Jon Snow and More

Behind the Work 398 Add to collection 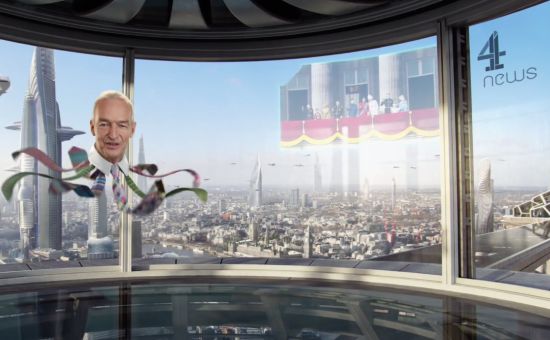 Too often our future world is depicted as some dark, dystopian land, ruled by an evil alien emperor and lit up only by the fires of hell protruding from Earth’s darkest depths. Who’s to say our impending alien invaders won’t be welcome cheeky neighbours? Well that’s exactly how 4Creative has pitched the future in its new film for Channel 4’s new digital service ‘All 4’. Imagined by creatives Chris Bovill and John Allison and brought to life by director Neil Gorringe and creative studio MPC, the film shows comedian Alan Carr as a mutated alien life form, broadcaster Jon Snow’s head atop tentacle ties, a gay royal wedding and the Grand National fought out between robotic horses. LBB’s Addison Capper chatted with director Gorringe and MPC VFX Supervisor Michael Gregory to find out how they realised the future of Channel 4.

LBB> When you were developing the idea behind the film, what was your starting point?

NG> The script was written by the CDs at 4Creative – Chris Bovill and John Allison. I think their starting point was thinking about All 4 as the future for how people experience Channel 4, and the whole futuristic idea grew from that.

LBB> And Michael, what were you thinking when the brief first came in?

MG> As is the case with all the Channel 4 scripts, I always enjoy reading them for the first time. I never know quite what to expect, and it’s generally left field! It’s a pleasure to bring their ideas to life. A tie-propelled Jon Snow head was the scene I was most looking forward to creating.

LBB> We often see very dark, dystopian interpretations of the future - where did the idea come from to portray it in this tongue-in-cheek way?

MG> Well that’s a good point, and we’re often used to seeing visions of the future at night - creating a daytime version required a different approach to make it look impressive. It’s always fun to do something unexpected and there was quite a bit of early R&D to get the look right. Some of the early concept we did had so much going on that when we came to rendering it we had to strip it right back otherwise it looked hyper real. We wanted it to deliver the message and look stylised and slick at the same time.

Exclusive: VFX behind the scenes from MPC

LBB> Where did you draw inspiration for the film from?

NG> Inspiration for the film came from lots of places – loads of sci-fi movies, and tonally the jokiness from Futurama. I also had in mind the funny little ads that you see in the original version of Robocop.

MG> Creating a futuristic world is definitely a lot of fun. Neil brought diverse references to the table and from there we broke down what we could have in each shot. The best bit is that in the future you can make what you like. That’s why we floated the BT tower and gave Alien Carr 20 eyes.

LBB> The colour palette is really vibrant. How did you come to that?

NG> It was all part of going for a fun future rather than a moody one – plus I wanted to echo the colour palette of the All 4 branding, which is really colourful and punchy.

LBB> You must have had some fun with the character design - what was that process like?

NG> Yes, that was fun. For example, working with MPC, we designed the look of Alien Carr’s multi eyed head, and then model makers Asylum took the design and created the prosthetics for Alan Carr to wear. I quite fancied Alien Carr having massive tentacle arms, so MPC made that happen in post. MPC obviously did a lot of great VFX and character work on the ad, and it was fun to see the ideas come to life, for example Jon Snow’s head floating on tentacle ties.

MG> We pre-vised the entire spot so we knew how Jon Snow and Alan Carr would look early on. This meant modelling Alan’s head in 3D, going through a number of iterations before we sent the final geometry to Asylum to sculpt. We concepted many different looks for the horse and rider outfit in the Grand National scene, looking to super-hero films and costumes you might see in something like Robocop.

LBB> What were the reactions of Alan Carr and Jon Snow like when they saw the final results?

NG> I’m not sure that they’ve seen it yet! I hope they like it.

LBB> What did MPC bring to the project?

NG> MPC brought an awful lot to the project – loads of ideas, enthusiasm and great VFX work. There was a really dedicated VFX team fronted by Michael Gregory and Greg McKneally who worked very hard to bring the film to life.

MG> As with any project I’ll work closely with the director to build a rich portfolio of reference. For the Jon Snow and Buckingham Palace sequence I took a lot of plate photography so I could look at exposures, lighting, depth of field etc. I did a couple of reference shoots at Buckingham Palace and also shot some stills in high rise locations around the city. What you see in the Jon Snow final shot is quite close to a still I took on my 5d in terms of light and exposure. Once the look was approved I then gave this to our lighter, Luca to match to.

Greg McKneally (our 3D Supervisor) managed all the assets that were created, some of them designed entirely by us. The two different drones, the space blimp, the space planes and the riders helmet to name a few. They all started from some form of reference and then the rest is from corners of mine, Greg’s and Neil’s minds.

LBB> How did you go about realising that futuristic vision? What kind of techniques and processes were involved?

MG> As with any job of this stature it’s always wise to concept the different environments, it really helps to save time later on when we’re building everything in 3D. It took meticulous planning up front, and then we had numerous assets to build. There were a lot of environments to build for a very short amount of screen time. For example in Jon Snow's scene we were building his tie propellers, the floating newsroom, the space blimp. Each was concepted and modelled separately. Then we had to matte paint the environment, the futuristic buildings and the flying cars. That’s all before it gets into compositing. Then the final result is only on screen for a matter of seconds.

NG> One of the trickiest things was getting the wardrobe right for the ‘future woman’ that you see in the ad. In the end we got something made for us by fashion designer Georgia Hardinge, which was a geometric dress that really worked with the whole futuristic theme.

MG> Duplicating and developing the crowd for Alien Carr was a challenge, we had a big camera move and not many extras to work with. We meticulously planned the move and worked out the exact measurements for each crowd plate. This was then all mapped out on the floor in the studio. It was shot motion control with the foreground crowd shot in-camera and the tiered seating shot as single assets and projected in later. We had to create bespoke lighting for different plates so when we tiled it all together it had the depth that you get in big stadium shots. We shot 60 plates of crowds to make this shot work. It was like putting together a giant jigsaw, just more time-consuming.

LBB> Personally, what is your favourite element of the film?

MG> I love the tunnel sequence, both the practical side of the LED tunnel that Tom Townend (DP) shot to Greg's (3D Supervisor) render. The geometric world he created took many journeys but ended up somewhere that we were all very happy with. He spent many hours hand animating the lights to match the real plate and the final render looks really beautiful. The sequence really pulls you in, it's art.

NG> Only Channel 4 would let you make TV promos like this, which is a great thing!

MG> We had a lot of fun making it and I think it shows. Hopefully when it comes on the telly it'll make you smile.