Your Shot: Bringing Festive Cheer to The Post Office with a Sausage Dog & Robert Webb

Behind the Work 504 Add to collection 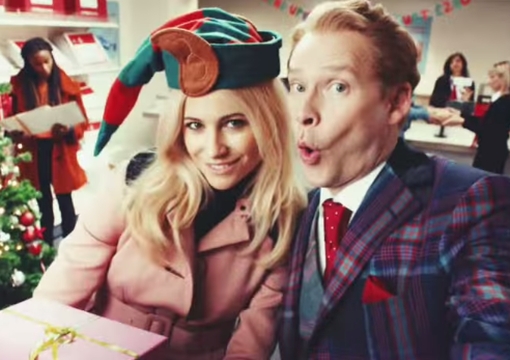 Christmas is all about having fun. Yes, it’s also about appreciating what we have and remembering loved ones who can’t be present, but really at the heart of the whole holiday is – in our eyes, anyway – fun. Which is why it’s so surprising that more Christmas brand campaigns aren’t as brilliantly as this year’s Post Office offering , the brand’s first TV work for five years. Peep Show’s Robert Webb exudes exactly the kind of flamboyance that made him a star in the Channel 4 comedy Peep Show and BBC sketch show That Mitchell and Webb Look. There’s enjoyably bad rhyming, (s)elfies, celebs, baubles, mince pies and – yes, we saved the best ‘til last – a sausage dog in a suit. FCB Inferno Creative Director Colin Mitchell, Copywriter Ali Dickinson, Art Director Jack Walker, and Hotspur and Argyle director David Kerr gave LBB’s Addison Capper the full story on this jolliest of jolly Christmas campaigns.

LBB> The campaign is brilliantly British and jolly, but without being cheesy and stereotypical. How difficult was it for you to strike that balance? How did you pull it off?

FCB> We were very careful to avoid stereotypical Christmas ads so that the Post Office would get standout. However we knew that with the self-knowing charm of Robert Webb, any hint of stilton could be safely avoided.

DK> Yes, trying to balance sense and nonsense, trying to be smart but silly... I wanted to tap into that very British tradition of the slightly unhinged authority figure, the sort of character John Cleese played so brilliantly, with a dash of Dahl’s Willy Wonka. I knew that Robert Webb would be great at landing the heightened quality of performance we needed to lend the script a knowing edge without it feeling too arch. Styling the Ministry of Christmas in a way that looked, at first glance, like Churchill's war room, was a nod to old Public Information films. I collaborated closely with my brilliant production designer, Jonathan Lee, to put as much detail into the set and dressing as we could. And Rob’s bespoke three-piece, designed by Rosa Dias, was another nod towards British eccentricity.

LBB> Given that Christmas campaigns are often pretty serious and emotional, was it refreshing to receive a brief like this?

FCB> It seems like everyone is trying to outdo John-Lewis this year, so a humorous approach seems the most effective way to get cut through.

LBB> Well it’s really lovely to see some properly funny Christmas work. David, were you worried at all about the two genres meeting or did it happen quite seamlessly?

DK> I don’t know why so many Christmas ads seem to strive for seriousness. That was definitely not our goal. The script evolved during pre-production. It always had an unapologetically Christmas flavour, but we kept tweaking it, along with the props and incidental visuals.

LBB> Why did the brief from FCB Inferno stick out as something you wanted to get involved with?

DK> The agency - and client - really liked the Christmas campaign ‘It’s Showtime!’ that I directed for BBC One in 2012 with Rob Brydon. It was a touchstone for the kind of energy, mischief and momentum they wanted this Post Office campaign to have. The agency had some sales points to nail, they knew they’d be involving some ITV celebs, and they wanted a colourful, charismatic host. The scripts were initially in a relatively embryonic state, partly because we didn’t know which celebs would come through. The biggest draw for me was my sense that the creatives, Colin, Ali and Jack, and everyone involved wanted the films to be properly funny, so I was more than happy to chip in.

LBB> It’s the first time Post Office has advertised on TV in five years. Why was the humorous approach the right approach for the brand? What was the strategic thinking behind it?

FCB> It was important that this campaign didn't add to the stress and pressure of Christmas by pushing over-sentimentality. The Post Office offers a crucial service at Christmas, and it has some fantastic new innovations, so we wanted to create an empowering campaign that would encourage people to get posting.

LBB> Why was Robert Webb the perfect spearhead for the campaign?

FCB> Rob's boundless panache was the perfect representation of the Post Office's efficiency over Christmas stress. Plus his charm, physicality and expressiveness meant that we can get away with some of the most daring wordplay this side of a Christmas cracker factory.

LBB> How were he and the other celebrities to work with?

DK> Robert and I go back some 15 years. We’ve worked together a lot - on shows like the BAFTA-winning That Mitchell & Webb Look and Fresh Meat. In fact I’ve worked with Rob more than I’ve worked with any other actor, so we know each other well. But he still surprises me. He is fantastically talented. The other celebs were a joy. None of them high-maintenance. All happy to drop in and play along.

FCB> The cast were fantastic, really relaxed and happy to come along for the ride. Best of all, they were game for our slightly surreal approach and were brave enough to get in the whirlwind of energy that Rob creates on screen.

LBB> And we can’t forget Doobie the Dachshund… What did he bring to the final production?

FCB> We made a decision early on to go with a sausage dog rather than a pooch that was a big performer - and a sausage dog can wear any suit almost as well as Mr Webb. Doobie is a master of understatement, the canine equivalent of James Dean.

DK> Doobie was very demanding. Kept asking for a bigger kennel. And her own bodyweight (yes, ‘he’ was a she) in doggie treats. But as a performer, Doobie instinctively understood that more can often mean less. Perfectly understated.

DK> We wanted to tailor each script to the celeb who featured in it, but we were chasing constantly moving targets. Only a few days before the shoot did we finally know which celebs were on board. We’d started building our Post Office set, but a lot of the special props, costumes and details were designed very close to the wire.

LBB> It seems to be pretty packed with different techniques and filters. Can you talk us through those and how tricky it was to merge them all together?

DK> I wanted a strong visual contrast between the Ministry of Christmas - a fairly moody space with hard light - and the soft-lit modernity of The Post Office. That meant the walls-parting reveal would really register. We shot everything very quickly (3 x 60” ads in two days), so our approach was to do as much as possible in camera, and to keep the lighting quite clean and simple. The ‘parcels piling up’ shot was straightforward lock-off stop frame animation. We attached a GoPro to a parcel and posted it. Aubrey Woodiwiss did a terrific job on the grade, and added the Instagram-esque filters to Pixie’s ‘elfies’.

LBB> The whole thing is really fluid too. Who did you work with on the choreography? Was it a tricky process?

DK> I wanted everything to feel as dynamic and energetic as possible. We put the camera on a telescopic arm to get the initial sweeping move as the Ministry walls parted (another in-camera effect). I used two cameras - one on a dolly, the other on steadicam. Sometimes we leapfrogged between them; other times we shot both simultaneously. My DoP, Philipp Blaubach, was enthusiastically on board with this approach. I also relied on my excellent A.D. team, led by Jim Imber to get the background looking animated.

LBB> Watching the blooper reel I get a reel sense of the fun that you guys must have had on set. Are there any funny stories you can tell that didn’t make it into that film?

DK> My only regret is that we didn’t have time to shoot with one of our props: a tray of Brussels sprouts arranged in a pyramid in the style of Ferrero Rocher.

FCB> Other than a few more profanity-laden bloopers, everything went worryingly smoothly. That sausage dog has a filthy mouth.

LBB> And perhaps the more stressful and tricky moments - can you tell us about those? Do any really stick in your mind as being particularly tough to overcome?

DK> The only stressful thing was time. Lack of it. Rob was in theatre, so on each of our two shoot days, he had to leave at 5pm. Nothing like a deadline to focus the mind…

FCB> Considering how quickly we turned around three variations of this ad, the amount of celebrities that we were dealing with, that Rob was performing at night and had to be whisked away to the theatre in the early eve - by a Christmas miracle, it was fortunately free of drama. Or unfortunately, when it came to answering this question. Ali once got a soya flat white, when he actually ordered a regular. He drank it anyway.

LBB> I think some ongoing content is set to go up online. Can you tell us a bit more about that?

FCB> We have a suite of bloopers, tongue-in-cheek Christmas tips and a social media game where you have to guess what our stars are posting in the new parcel size. We also have some dog cam footage - turns out Doobie is better in front of the camera, than behind it.