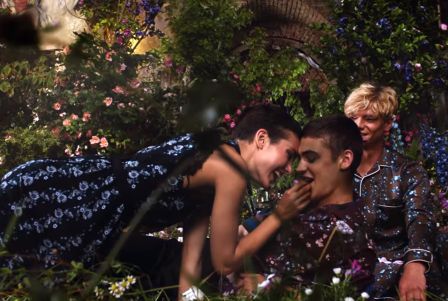 To mark the launch of their latest collection, H&M enlisted the help of the legendary director Baz Luhrmann to create The Secret Life of Flowers, a spectacularly dream-like short film produced in collaboration with Bazmarks (Luhrmann’s production company in the US), Biscuit Filmworks UK and Absolute Post.

Set in the fictional paradise of Reddham Gardens, it’s hard not to get lost in this fantasy world the team has created.

A true treat for the eyes, LBB’s Liam Smith caught up with Absolute’s Ben Robards, VFX Supervisor, and Matt Turner, Head of Colour, to find out how they brought an eternal spring to this autumnal setting.

LBB> Absolute were involved with this project from the very beginning. Can you tell us your initial thoughts when Bazmark approached you to work on ‘The Secret Life of Flowers’?

Ben Robards> It's not every day you're given the opportunity to work with a major movie director, but that wasn't what excited me; it was actually the storyboards which brilliantly revealed an extraordinary narrative filled with genuine beauty and romantic intrigue. The boards and the reference imagery immediately got our hearts beating and ensured we had to drop everything to win the work. It’s very rare to get such a coherent evocation of the finished work so early in the process.

LBB> How did you collaborate on the pre-production stage?

Ben Robards> We had a considerable amount of communication with Bazmark throughout pre-production. Baz surrounds himself with a very talented team, so we were able to exchange resources, share assets and compare models. In addition to the Bazmark collaborations, when we discovered that the shoot art director was David Lee who we've worked with several times, we knew that we could rely on each other to handle the intricate VFX/art department crossover with really good mutual trust. The meticulous detail that went into planning the production meant that everyone shared a rock-solid confidence when Baz grabbed irresistible opportunities to improvise during the shoot.

LBB> The colour grade is really something special. Can you talk us through the techniques and processes behind it?

Matt Turner> The H&M grade presented some unique conceptual challenges that took me to the limits of the machine’s capability - one shot had over 80 layers of colour correction alone and many shots were completely re-lit in the grade by recreating light sources with multiple windows and flagging down other unwanted lit areas. The intensity of the flowers was paramount to the look and keeping the vibrancy throughout was key.

Some scenes were shot at different times of day and were cut together, so maintaining the continuity was achieved in a uniquely collaborative process between Flame and grade.

The entire look evolved over 100 hours of grading and finessing all overseen by Baz’s razor-sharp eye and obsessive attention to detail. The beauty of the finished article is testament to all involved and I'm exceptionally pleased with how it looks.

LBB> Are there any CG/post elements a viewer could easily miss?

Ben Robards> Prior to Matt's grade we put a huge amount of work into helping balance out the portico/dinner scene which was shot from late afternoon to midnight. This involved rotoscoping all the cast, candelabras and furniture in order to add flicker and shadows from the candles, and replacing skies and backgrounds in several of the shots. The brilliant Flame op Simon Holden really delivered on this scene, and allowed Matt Turner to give Baz the beautiful candle-lit continuity that he was seeking. There was also a lot of VFX work that prepared the ground for 'autumnalising' all the exterior shots.

In addition to all the usual clean-up that's inevitable with drone and crane shots, and the 'autumnalisation' of the trees and landscape, Baz had a very clear idea of exactly how dilapidated the interior walls of the house should be, so we added cracked plaster, lath and exposed brick-work to many of the shots.