Your Shot: Barnardo’s Heads Off a Cruel Cackle of Hyenas

Behind the Work 586 Add to collection

FCB Inferno, Rogue’s Sam Brown and The Mill go behind the scenes on an emotive depiction of modern bullying with LBB’s Laura Swinton 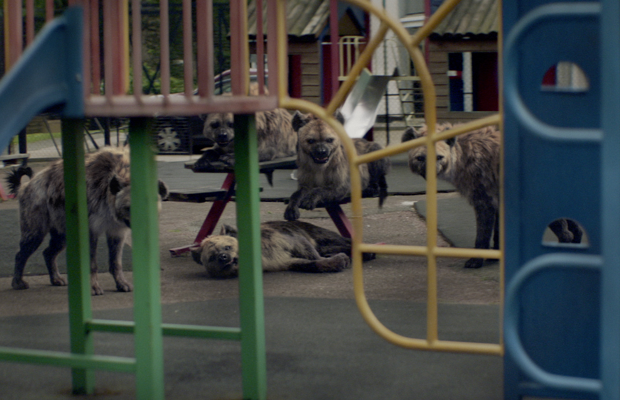 British children’s charity Barnardo’s has kicked off a new three-year campaign with their agency FCB Inferno. The film, Hyena, explores what it’s like to be a schoolchild dealing with anxiety in the smartphone age. By portraying that anxiety as a sinister, sadistic clan of hyenas hounding a 12-year-old girl at school, on the walk home and in her bedroom, the 40-second spot uses metaphor to conjure up a visceral reaction.
The film builds on Barnardo’s Believe in Me platform, which FCB Inferno has established over previous years. The platform has been created to offer a more hopeful and optimistic message that combines the gravity of issues experienced by vulnerable children with an awareness of the services offered by Barnardo’s.
All of the spots were directed by Sam Brown, produced by Rogue Films with VFX from The Mill. LBB’s Laura Swinton spoke to Sam, FCB Inferno creative team Jayshree Viswanathan and Chelsey Redshaw, and The Mill’s executive creative director, Jonathan ‘Wes’ Westley and colourist, Seamus O’ Kane.
LBB> How does this campaign differ strategically from previous Barnardo's campaigns?
Jayshree & Chelsey> The ‘Believe In Me’ creative platform, which was introduced a few years ago, strategically recast the young people that Barnardo’s works with in a more positive and empowered light. Instead of showing them as victims, they were portrayed as resilient individuals with the inherent potential to overcome even the worst circumstances with the right kind of support. Our new campaign builds on the first wave of ‘Believe In Me’ by making Barnardo’s key role in that healing process more explicit. Each ad clearly identifies the very specific fear or struggle each child is facing, and then goes on to show how they have begun to work through it with the support and belief of Barnardo’s trained counsellors.  One additional difference as compared to previous campaigns is that we have given more focus to mental health issues, as we know that this is something that is on the rise in young people and makes the work that Barnardo’s does even more vital.
LBB> How did the idea come about?
Jayshree & Chelsey> We inherited early scripts from another creative team, which seeded the idea of using animal metaphors to represent each child’s feelings. What we immediately saw in them when they passed to us, and what we felt would also resonate with audiences, is that how immediate and relatable they made our otherwise complex topics. Issues such as mental health might not seem comprehensible to people with no experience or relation to them, but the fear of being terrorised or pursued by a wild animal is something that anyone can understand. The animals also provided a compelling way to tell these very important stories. And of course, when was the last time you saw a pack of hyenas in a charity ad? The cut-through potential of that alone was a really exciting prospect.
LBB> Sam, what was it about the idea that appealed to you?
Sam> I just loved the visual metaphor in the script, and the way that the hyena represents the child’s anxiety in physical form. It’s predatory and kind of parasitic. It’s skittish and timid when alone, but bold and dangerous in a pack. It’s noisy and unpredictable.
LBB> The films deal with difficult topics using the most visceral metaphors - how did you strike the balance of creating something heightened and monstrous while also staying true to and respecting the stories?
Jayshree & Chelsey> When we came on to the project we had a clear point of view on how the hyenas should be portrayed. We felt that they should be as realistic and threatening as possible to make the fear experienced by each child really visceral, but we didn’t want the ads to descend into horror-movie territory as that would start to feel contrived and detract from the story.
We were lucky enough to work with a fantastic VFX team at The Mill, who did a huge amount of research into the characteristics of our chosen animal – and we heightened those where we could to really make the fear and discomfort they elicited as intense as possible. By contrast, we made sure to keep all the other elements in the ad as understated and unremarkable as possible, so that the animals were the only extraordinary thing in the scene.
Sam> Kids have amazing and intense imaginations, whether they’re thinking about something good or bad. They can dream up things very easily and make them real, an ability that we lose a bit when we grow up. We wanted to keep the line between the actual world and the imagined one quite loose in the finished film. I guess the implication is that the animal isn’t real, but it’s very real to the child. It’s a vivid stand-in for the real thing, whether it’s an actual person or just a feeling.
It really helped to not have the animal there when we were shooting. It was one of those rare situations where asking the actor to imagine their CGI screen partner was a good thing, because with the right words children can conjure something much more potent and powerful than what you can show them. You can begin to sketch an idea or a presence, and they will fill between the dots very quickly and vividly.

LBB> In terms of the character design for the hyenas, these are photoreal but also heightened and sinister - the drool, the eyes - can you talk me through how you worked to design the creatures and what you wanted to capture?
Sam> It’s amazing the amount of detail they CG artists go in to. They build each hair individually. They’ll spend hours, sometimes days, building in the right layers and opacity in an eyeball, and agonising over the reflections, even if it’s going to end up buried way back in the shot somewhere on hyena No.5. It’s bonkers.
But away from the minutiae, what’s really cool is the way in which the CG artists ‘cast’ the animal, almost like you would an actor. Before they get into these details, we talk about the broader characteristics that define it. For example, we wanted these hyenas to be mangy and street-dwelling. Urban. The kind that live on scraps and sleep in the gutter.
I’m really proud of the post. Ultimately the more time you have in CG the better things get. I was amazed at what the Mill achieved in the short time frame we had.
Wes> As with all creature jobs, the process starts with casting – identifying the personality and character we want in the protagonists, deciding how dirty, scruffy, or furry we want them to be. Together with director Sam Brown, we selected five real-world hyenas and used those as references for the basis of each scene in which they feature. Using reference footage, we shot at a safari park, together with sourced reference footage of hyenas in the wild, we built a library of actions which we used to inform the animation and look.
LBB> The hyenas have a menacing, slightly monstrous edge to them - photoreal but with an extra layer of character - how did you strike that balance?
Wes> Animation is a key part of the process and Sam was keen for us to ensure that the hyenas’ actions remained in the realm of what they would do in the real world. The hyenas are hanging around in the places she has to walk on her way back from school, a few of them messing around while the others provide a menacing stare. Them just being there introduces an element of threat and fear.

LBB> From a technical point of view what were the biggest challenges you faced bringing this project to life?
Wes> The trickiest part was using the hyenas to get across the feeling of anxiety experienced by the young girl in a few short shots without it feeling too threatening or overly animated, focusing on smaller actions and movements
It’s a project and cause that we are proud to have been given the opportunity to support and help bring to life.
LBB> In terms of the grade, how did you use that to heighten the fear and terror around the story?
Seamus > With the grade we sought to maintain a sense of muted reality that would allow the hyena characters to react normally with the locations and light. The low lights were softened and the highlights maintained details to further this effect.

LBB> What were the trickiest aspects of the Hyena film and how did you navigate them?
Sam> It was tricky in that it was very emotionally draining for Maddy. The tight resources meant that we shot everything in one day, which was asking a lot of her.
LBB> Maddy brings a lot to her performance -  how did you cast her and how did you work with her on that performance?
Sam> It’s interesting, because with something like this you’re not really looking for the children to come into a casting and just act something out. You can’t really get there with acting, so you have to go into it with them and find those emotions for real, which is obviously a delicate and difficult process. I found what helped enormously was taking a quiet moment before each shot to engage with them one-on-one and set a kind of emotional tone. Of course, you need to describe what’s happening in that particular scene, the mechanics of it, but more importantly you need to remind them who they are and place them gently but firmly back into the shoes of the child they’re representing. This is a big investment on such a compressed and pressured shoot, but this kind of background is really important, because once they’re in that more delicate state you can begin to turn the camera over, and with any luck the emotions will start to bubble out with very minimal direction. It’s really 95% about creating that world for them, and then 5% actually telling them what to do.
So, at casting stage you’re really just talking to the children as much as you can: do they understand the story you’re trying to tell, and who the child in the film is? Do you feel that flicker of empathy in them as you’re talking? Are they emotionally open, but at the same time resilient enough to go home afterwards and feel OK? You’re probably only going to find one in a hundred or more who ticks all these boxes, so choosing the right one is surprisingly easy.
I was also struck this time by how your actor’s breathing can help or affect their emotions. A surprising amount of the direction was just this, setting up and working on Maddy’s breathing.
LBB> It's a campaign that deals with some difficult emotions but ends on a note of hope - why was that important?
Jayshree & Chelsey> From the case studies we’ve read and research that we’ve done, we know that something as simple as a child finally talking about what they have been going through can make them feel like all is not lost. So it was important for us to end on a hopeful note to signal this upturn in each child’s life following the support and care they received from Barnardo’s. At the same time, we were wary of suggesting that it was a happy ending as we know that the process of healing and overcoming past trauma isn’t a simple process. We therefore tried to subtly signal a shift towards a more optimistic outlook by using brighter colours and more natural light, while still maintaining the sense of vulnerability and empathy we felt for each child at the end of the ads.
view more - Behind the Work