Behind the Work 308 Add to collection 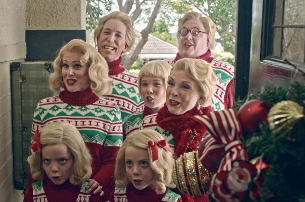 At this time of year Australians get inundated with messages about the ‘perfect Christmas’. You know: white snow, log fires and other general winter magic. But that ain’t Christmas Down Under. Christmas is at the height of summer in one of the planet’s warmest nations. Agency BMF has drawn on that insight for its festive campaign for ALDI Australia. ‘Nothing Beats the Perfect Aussie Christmas’ features an extremely passionate family from the Northern Hemisphere, The Tinkletons, who visit Australia to convince the people of the virtues of a northern Christmas. It doesn’t quite go to plan.

LBB> Why was this outlandish juxtaposition of the over-the-top Northern Hemisphere family against the Aussie Christmas perfect for ALDI?

AD> ALDI have used ‘The Perfect Aussie Christmas’ to support their range of Aussie-centric Christmas products for more than four years. It’s been getting a lot of traction because it’s different to the way other brands here talk about Christmas.

The climate here and the relaxed way that Aussies celebrate Christmas doesn’t fit with the Northern Hemisphere traditions of log fires, knitted sweaters and carb-loaded Christmas dinners. Despite that, we’re still sold the idea of a frosty, tinselled Christmas in movies, TV shows and ads.

The conversion of the American family was a way to get Australians to look at their Christmas through different eyes. We hope it instils pride in the Aussie way of doing Christmas – once you get over the sunburn and speedos, it really is special.

LBB> What kind of research led to the insight to approach the campaign in this way?

AD> We talk to ALDI shoppers (and non-ALDI shoppers) non-stop. ALDI is typically thought of as a discount supermarket, which means we have to work harder than most to convince shoppers that the Christmas range is of high enough quality to be worthy of their Christmas table. Hence the beautiful food shots that do justice to the quality of the Specially Selected range.

But our research also revealed something special about how Aussies view their own Christmas. Most of us take it for granted that we get to enjoy the sun, surf and sand at Christmas. While we wouldn’t have it any other way, we didn’t actually appreciate it – that is, until we saw it through the eyes of an outsider from the Northern Hemisphere. Meanwhile when Northern Hemisphere people experience Aussie Christmas (including our Creative Director and Group Account Director), they don’t think it’s a ‘real’ Christmas. We felt there was a tension here that allowed us to rally a sense of pride in Aussie Christmas.

LBB> Where did you look for inspiration with the overall vibe and flavour of the campaign?

LBB> How did the insights of the non-Aussies working on this affect the overall outcome?

AD> Apart from the Group Account Director Toby and myself, we’re almost entirely Aussies. I don’t think the non-Aussie insights were vastly different from the Australian ones. Naturally the Aussies had more to say about the Christmas they grew up with, but we’re all fully aware of the cliché of a traditional American, or English Christmas from TV shows and Hollywood movies.

LBB> What has reaction been like in Australia to the campaign?

AD> ALDI ads always cut through in this market because they’re equal parts brave and silly.

Australians don’t take themselves too seriously and while most Christmas campaigns strive for heart and warmth, and come out a little earnest and overheated, ALDI just loves to take the piss. That goes down well here.

The campaign only launched two days ago, but it’s already been viewed as much as our previous Christmas campaigns on Facebook and YouTube – which is great.

AD> It’s ALDI’s biggest campaign of the year and there are so many moving parts, the toughest thing is making sure that the idea and the art direction translate seamlessly across everything.

We’re a relatively small team, which means you need to trust each other to carry the idea and take pride in executing it whether it’s an EDM, an in-store poster, or launch TV spot. The power of a good idea is that it helps in getting everyone to pull in the same direction. The whole team did an incredible job.

Another tricky component is that we were briefed in April – which in ALDI terms is unheard of. We’re used to turning around retail campaigns in a couple of weeks, so we had to keep focused on the end result through months and months of other campaign activity.