Your Shot: Absolut’s ‘Next Frame’ 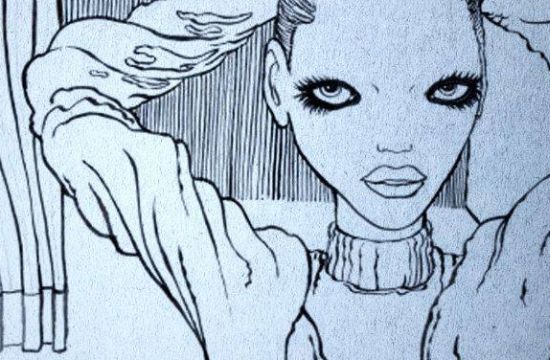 Absolut Vodka has a history of artistic collaborations and creative projects – 2012’s one-of-a-kind personalised bottles, for example. Recently they and agency Sid Lee Amsterdam have been working with four artists to explore the transformative nature of creativity in a project called Transform Today. One of the artists, Brazilian graphic novelist Rafael Grampa, is pushing the project forward with an unusual and ambitious crowd-sourced animation project. LBB’s Addison Capper caught up with  Mathias Westphal, Absolut Global Brand Director, to find out more.

LBB> Where did the idea for 'The Next Frame' come from?

MW> Next Frame was created as a way to build on Rafael Grampá’s inspirational story of how he transformed his life and his work; a story we introduced with the launch of Transform Today. We began looking at ways to collaborate with Grampá. We wanted a unique creation that would continue his own story of transformation, by empowering him to push the boundaries of his work.

We also wanted to allow audiences that were moved by his story to use their own creativity in a transformational way.  Next Frame was created to foster and push the creativity of both Grampá and contributing audiences.

LBB> And why did you feel it important for the users to play such a pivotal role in the project?

MW> The goal of Transform Today is to inspire audiences to think about their own creative potential, using the stories of our four campaign artists as the inspiration. Rather than just ask consumers to be inspired by our campaign, we wanted to give an opportunity to act on the messages of the campaign by collaborating with one of the artists.

Next Frame shows how anyone, no matter where they are in the world, can participate in artistic creation.

LBB> Why was Rafael Grampá the perfect fit to bring it to life?

MW> Like each of the four crusaders (Grampá, Woodkid, Yiqing Yin, Aaron Koblin) we worked with for the launch of Transform Today, Grampá is a passionate artist that always wants to push himself and his art to the next level. This drive and dedication is what led us to choose him to be part of Transform Today, and is what makes him the perfect collaborator for this global online project. 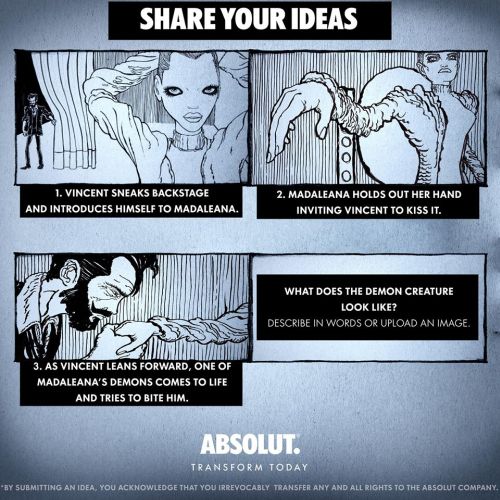 LBB> Can you tell me about the logistics of the campaign and how users can pitch plot decisions?

MW> Throughout the three-week collaboration phase, we give Facebook users a chance to peek into sections of the story through a series of frames in a photo album. In the final blank frame of the series, users have the chance to suggest what should happen in the comments. These decisions include creating characters and helping fill in the details of the world created for the story. Grampá then chooses his favourite suggestion and incorporates it into the story, which is revealed before the next opportunity for consumer interaction.

LBB> Grampá's personal story is a central pillar to the campaign - what kind of role will it play and what does it involve?

MW> The Next Frame project is about supporting Grampá as he continues his own story of transformation, but it is also a way to give consumers an opportunity to be a part of this story and to create their own. Transform Today is about exploring your own creative potential, and Next Frame allows each of the collaborators to do just that. 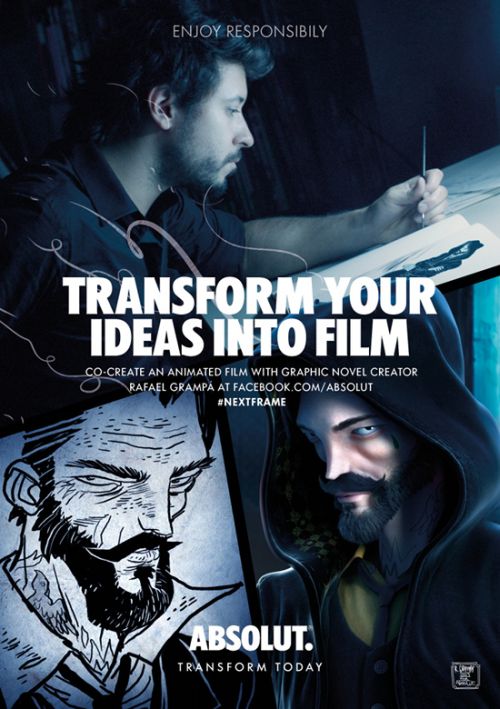 LBB> Absolut has a history of working closely with artists in a unique way, such as the one-of-a-kind bottles. Why does the brand see art and creativity as an important way of marketing itself?

MW> Creativity has always been part of the brand DNA. As a brand that continuously tries to push boundaries in everything it does, we believe in the power of art and creativity as a way to encourage forward progress of ideas, which range from social issues, to nightlife conventions, to what one expects from an advertising campaign.

This sort of progress is important to the brand, which is why we want to advocate for the exploration of creative potential.

LBB> What else can we look forward to from the 'Transform Today' campaign?

MW> Transform Today is not just about the four artists that we launched with. The campaign is about connecting with the creative spirit in all of us, so we will continue to evolve the campaign to find new ways to inspire audiences to think about their own creative potential and to act on it in a meaningful way.