'Your Power The Game' 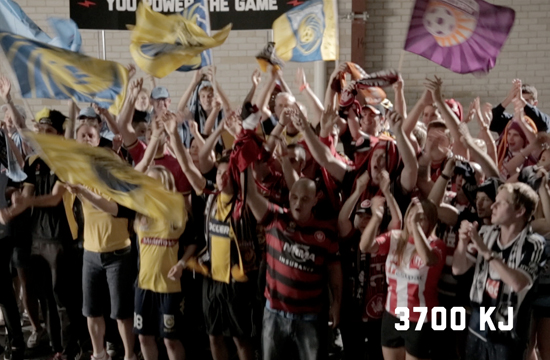 The Hyundai A League 2012/13 season has been widely acknowledged as the league’s best season since its inception. Record crowds, memberships and TV ratings have seen the league penetrate the mainstream sporting landscape.

In the words of FFA CEO David Gallop, “the sleeping giant is awake and ready to stomp around”.

Last season also saw the arrival of three truly global football stars; Alessandro Del Piero, Emile Heskey and Shinji Ono. With such a wealth of experience amongst them, the quality of football witnessed by the fans was awe‐inspiring.

Football Federation Australia (FFA) launched the 2013/14 season campaign via Sydney advertising agency BMF in mid-°©‐September, which celebrates the electricity and distinct nature of the A-League atmosphere and showcases the role the fans have in creating it. Putting the power of the fans front and centre, illustrating their ability to orchestrate the destiny of the game.

FFA CEO David Gallop said: "Last season showed that the A‐League atmosphere is something unique, the fans are loud and proud and this campaign will blow the lid off it and show not only our fans but those new to the game what the A-League is all about".

Alessandro Del Piero, Harry Kewell and Emile Heskey star in the campaign and all state they thrive on the power of the fans during their 90 minutes of battle. To them the fans are everything. They are the reason they play. “The atmosphere in the A-League game is great, it’s fantastic. Last year I played in a whole stadium and you can feel that the crowd is passionate about the football. The fan effects on the pitch for me is very important,” Del Piero says as part of the campaign.

The teaser campaign kicked off September 20 with a DM and online component, before it stepped up a gear on 7 October with the release of one 30" and two 15" television commercials, which will screen on free-‐to-air and subscription TV nationally and in New Zealand to mark the Hyundai A-League 2013/14 season launch.

The DM Activation was produced by BMF’s content division.