You Shot: Droga5 and Air Wick Unlock the Science of Scent This Christmas

Behind the Work 543 Add to collection 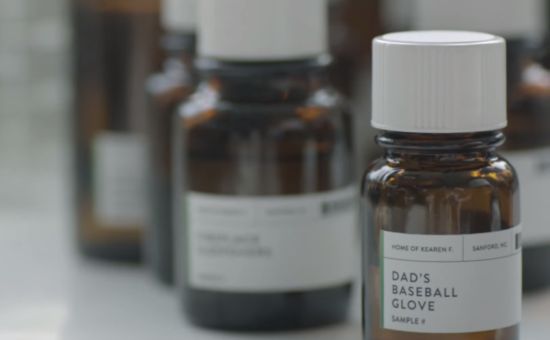 It’s a curious fact that our sense of smell plugs straight into the part of the brain that deals with emotional memory and motivation – so when it comes to moving people on a profound psychological level, olfaction may well be the most powerful tool we have. It’s something Droga5 found out when they created a recent seasonal campaign for Air Wick that combines cutting-edge scent technology with a heart-warming family story. The Fellers will be spending this Christmas apart as father Kearen is a soldier in the US military, so Droga5 and Airwick recreated the scent of home in a very unusual surprise package. Senior Art Director Devon Hong and Senior Copywriter Tara Lawall spoke to LBB’s Laura Swinton to explain how they brought this project to life.

LBB> The science behind smell and emotional memories is completely fascinating. How did you come to the idea of using it in such a personal way for a campaign? And how confident were you at the beginning of the process that the technology would exist?

DH> We were really excited when Air Wick told us they use a technology to capture and recreate real scents. We immediately started thinking about how we could use it to tell a great story. We thought about the people who would benefit the most from this technology, and military personnel came to mind. To be honest, we weren’t entirely sure what the end product was going to be, and we knew it was going to be a bit of a gamble.

LBB> This campaign feels like a very different kind of strategic approach for a brand like Air Wick. It’s focusing on family and emotion rather than just the home. What sorts of insights led to this approach and, at the time, did it feel like a big departure?

TL> Our strategic team at Droga5 challenged us to think about home fragrance differently. Many of Air Wick’s competitors position fragrance as a way to cover bad odors, but we wanted people to think of home fragrance as a way to help create an atmosphere at home. Much like you use perfume for your body, you could use Air Wick products/fragrances/scents for your home. This led us to a much more creative place. Just like you display family photos or pass down family heirlooms, scent can also be a form of self-expression.

LBB> What went into synthesizing the aromas for the candles? Was it existing Air Wick technology?

DH> Air Wick scent experts use a technique called Headspace Capture that traps the scent of an object – such as the glove, the fireside, or apple pie, and filters it to craft the perfect harmony of fragrance notes representative of the elements found in these objects. This process was used to create some fragrances of the Air Wick National Park Collection, for example, and is one of many techniques used by Air Wick fragrance experts to develop scents.

LBB> How did you come across the Feller family, and why were they the ideal candidates for the project?

TL> We worked with a real-people casting company and did multiple rounds with them, interviewing about 20-30 families total. The Feller family was likeable from the start.  Their home’s story was fascinating and it was Kearen’s first interview that really stuck out. At the beginning of the video, he came across like a tough military man, but as the interview progressed and he spoke about his family and home, he became emotive and warm. He is an authentic and matter-of-fact man. It made us like him, not just as a potential character in a branded film, but as a person, too.

LBB> The smells that they came up with were wonderfully evocative…which were the most challenging to recreate? And how did you and the family develop the ideas for which scents they wanted to capture?

TL> At first a lot of cooking smells came to mind, such as the Apple Pie.. But in speaking with Cortney Feller more extensively and finding out more about their family and the story of their home, we were able to learn about the strong association Kearen had to his baseball glove and the family fireplace.

DH> We wanted each scent to have a strong story behind it. And the more stories they told us, the more obvious it became that those were the scents we needed to capture. When Cortney told us about Kearen’s glove and how the kids now use it, we nearly cried right then and there.

LBB> As for working with the dad of the family, Kearen, what was it like for you to witness his reaction to the scented candles? I suppose it’s quite rare to see a piece of your work touch someone so immediately!

TL> It’s fair to say that both Devon and myself fell a little bit in love with Kearen. His reaction was true to who he is, very authentic and very connected to his family.

DH> I was so nervous about the reveal day, I couldn’t sleep. I remember my hand shaking as I was packing up the box thinking, “This is it.” When he actually started tearing up, there wasn’t a dry eye in the room.

LBB> Director Keith Ehrlich from Uber Content did a lovely job of capturing the family and keeping it light on sentimentality. Why was he the best person for the job?

TL> Keith was a very collaborative director and brought with him a great team, especially our Director of Photography Jackson Hunt. Together they were able to capture moments that were so beautiful and so seemingly small, at the time, but so emotive when the story was assembled.

DH> Also, our Editor Mark Potter from Cosmo Street was a dream. We have worked with him in the past as well, but he never ceases to amaze us with the way he builds a story.

LBB> Do you think this kind of tailored olfactory technology might have potential for mass market reach in the future?

TL> We’ve seen some prototypes, on the Internet, of devices that can recreate scent, but we’re not sure about mass market. It would be cool to be able to do what we did for the Feller family for other families.

DH> It’s funny. Anyone I’ve told this idea to immediate goes into what scent they would capture to remind them of home. So I think there’s an opportunity for it. Personally, I’d love to get a candle with the scent of Hong Kong taxis. Scent is a nice word to call it, but it’s basically a combination of new leather and plastic. That’s where I grew up and oddly, it reminds me of home.

LBB> In a broader sense, scent is a sense that has been relatively unexplored by the advertising industry. I know it’s well used in retail and product development and as VR develops, people are talking a lot more about complete sensory immersion experiences. I’m just curious to know how this project has changed your own thinking about scent and how you think the industry might be able to better exploit the sense of smell in the future?

TL> There is so much untapped potential in scent. It’s what first got us excited about Air Wick and the strategy—especially, as you say, from a more experiential point of view. We feel like we have only just begun in terms of what we can do with Air Wick and the power of scent.