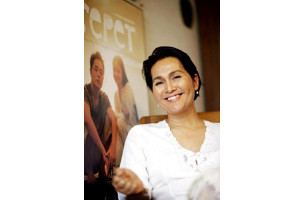 The Yasmin Ahmad Museum has launched a campaign via crowdfunding website “Startsomegood.com”, to fund the overheads costs to keep its doors open.

The museum was founded by Yasmin’s family with the goal for it to become a place for arts and culture to thrive; and a hub of artistic activity in Perak, as well as to propagate Yasmin's teachings of love, acceptance and harmony in a multi-racial nation. The campaign aims to hit its tipping point of USD$17,500 by the 24th of November 2015. With slightly less than ten days to 24th November, the amount of $4,016 raised so far is a long way from hitting its target.

Yasmin Ahmad was a long time Burnetter for 16 years and was an executive creative director at Leo Burnett Kuala Lumpur. An acclaimed filmmaker, a Cannes Lion winner, an Executive Creative Director and an amazing Storyteller, Yasmin’s commercials and movies struck a chord with many people both in Malaysia and from abroad. Known for her honest portrayal of the beauty of everyday Malaysian life, she showed ordinary, flawed human beings who are capable of being extraordinary – of achieving great things and great happiness, because love and kinship triumph above all else. Her philosophies and spirit of universal harmony channeled through her many works and formed the basis of founding this museum come resource center.

The funds raised from this initiative will go towards the costs of material and services for permanent installations; costs relating to curations and content including printing, framing, artist or collaborator fees; maintenance costs including electricity and basic repairs, administrative fees, transport, and a museum caretaker for at least two years.

“Yasmin’s work has had a tremendous impact on Malaysians. And now more than ever, we need to keep her voice, wisdom and sense of humour alive to continue inspiring us all. I urge everyone who has ever laughed, cried or paused to think after watching one of her films or commercials, to please donate to the crowdfunding campaign. We only have 10 days left," said Iska Hashim, creative director, Leo Burnett Malaysia.