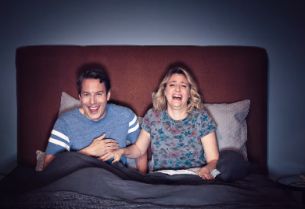 Xfinity today launched Glued, the brand’s first ever original web series. Executive produced by Sharon Horgan (Catastrophe, Divorce) and directed by John Riggi (30 Rock), the webisodes are a humorous take on how people’s favourite television shows change the way they act and interact with each other. The show was created with advertising agency Droga5 in partnership with Merman X Pulse.

Starring John Ross Bowie (Big Bang Theory) and Jamie Denbo (Orange is the New Black), Glued takes viewers on a comedic journey in the life of a married couple who discover a new hit television show. From overcoming frustrating barriers to watching it, dealing with the guilt of “TV cheating” on your spouse and navigating the murky world of spoiler threats, Glued highlights different realities about how our favourite shows impact our lives. Throughout the web series, the couple’s relationship grows and evolves just as their relationship with the show deepens.

"There are so many stories around the way we watch television, and we had so much fun telling them,” said Horgan. “We didn't have to stretch very far beyond our own real lives. It all felt so fresh, and clever, and real, which is what I really responded to.”

The first four webisodes of Glued are now available on the Xfinity YouTube channel,watchable.com and Xfinity On Demand, with the final two scheduled for release June 30. All six webisodes – titled “The Discovery,” “It’s Bedtime,” “They’re Here,” “The Betrayal,” “Spoiler Alert,” and “Le Fin” – range from three to five minutes in length and each focus on a different TV-watching behavior. Whether it’s establishing viewing rules with your spouse or developing new parenting techniques to facilitate binge-watching,Glued contains storylines everyone can identify with.

“TV is more than entertainment – it’s a universally shared experience that brings people together, and Glued explores the common behaviors we all recognize when we get hooked on a show,” said Sherri Davis, Senior Director, Brand Experience at Comcast. “Sharon Horgan has an incredible talent for highlighting these cultural truths, demonstrating how Xfinity connects people to the things they love and enjoy.”

Horgan served as an Executive Producer for Glued. Among her other credits, she co-created, co-writes and stars in the British sitcom Catastrophe and is also the creator and executive producer of HBO’s upcoming comedy series Divorce. Riggi directed all six episodes, while real-life married couple Bowie and Denbo starred as the couple alongside guest stars Ian Lithgow (3rd Rock from the Sun) and Deborah S. Craig (The Blacklist).

"This was the closest project we have ever done to our real marriage,” said Denbo. “Glued is basically our life. One week John watched our favorite show without me and I was ENRAGED. I forced him to re-watch the same episode with me again. Which he liked, so that backfired. Point is, the show is very real."

The series is being supported by an integrated digital and social media campaign, including 15-second cut-downs, a show trailer and customized GIFs across brand owned and paid channels.