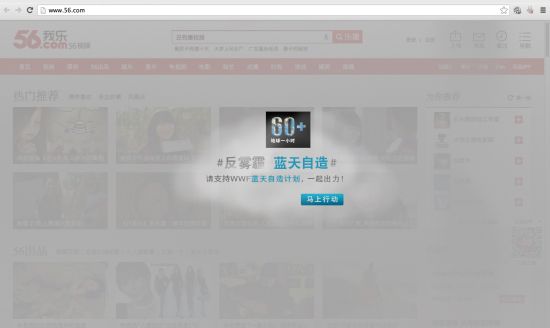 As part of the Blue Sky Project that will launch during Earth Hour tomorrow – March 29th from 20:30 hours to 21:30 hours – the campaign aims to engage with at least 91% of netizens who are social media users across China.

China’s top networking sites - including Ren Ren, Ten Cent, Ushi and Youku – will all allow a digital ‘smog’ to hijack their websites for an hour.

Netizens online during Earth Hour will be welcomed by an unpleasant surprise – a cloudy grey smog engulfing the websites they use.

By tracking IP addresses, the amount of ‘smog’ on screen will directly reflect the amount of actual smog outdoors at their current time and location.

When netizens click, a window pop ups that displays the live AQI or PSI reading. This is followed by a sobering message from WWF:

If you don't accept this web experience, why would you put up with it in real life?

According to a report released this week by the World Health Organisation, 40% of the world’s deaths caused by air pollution were from China and air pollution in China causes more deaths than AIDS, diabetes and road injuries combined.

Darius Karbassioun, Head of Engagement Planning, BBH China, Commented “We made the digital space our battleground of choice again for a critical reason. Air pollution has become ubiquitous in China. The one place that people can hide from air pollution with no problem is in their digital lives. By hijacking netizen’s favourite websites with smog, we would give them no choice but to confront the problem head on.”

Zhang Jingning, Head of Digital Communications, WWF China, added  “A smog on the screen is not as harmful as a smog to a human being. But this disruption to a daily activity will hopefully create the awareness we need to address China’s air pollution hazard and drive traffic to Earth Hour for more answers”

The Blue Sky Project campaign follows the success of Earth Hour 2013 where among a host of initiatives WWF and BBH along with top Chinese networking sites hijacked the digital space with a ‘blackout’. The campaign recently won the AME New York Festival Green award – the highest honour recognizing effective resource conservation efforts.