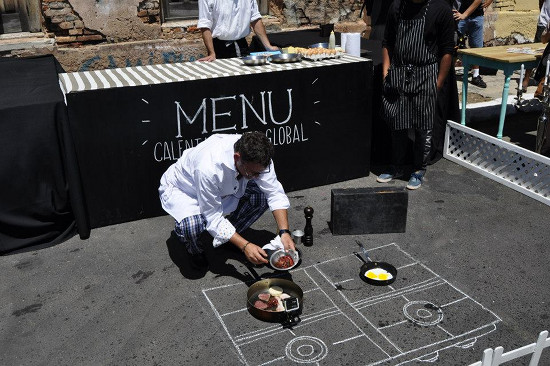 In Asunción, capital city of Paraguay, one of the warmest capitals in the world, Oniria\TBWA and WWF made an event to generate awareness about global warming.

A couple of eggs, meat, the skill of a chef like Rodolfo Angenscheidt and hot asphalt made the "Global Warming Menu" possible, a lunch that was cooked by the asphalt of the Guarani capital’s heat.

Paraguay is one of the most deforested countries of the region. About 1.7 million hectares remain out of the 8.8 million of the Upper Parana Atlantic Forest (BAAPA) recorded in 1960, equivalent to one fifth of the surface of Paraguay. That is, in the last 50 years, 80% of the Paraguayan native forests have been destroyed.

Last December, the Weather Extremes organisation - which monitors the weather in the world - named Asuncion the hottest city, followed by Paulo Afonso (Brazil) and Salto (Uruguay), among others.

"The massive and uncontrolled deforestation that is occurring in the recent years in the Paraguayan Chaco, and the fires and smoke caused, reinforce the rising heat waves that hit the country," said Raúl Rivarola, a biologist specialising in Forests and Sustainability of the Local Impoverished Communities by the University of Copenhagen, Denmark.

"The intention is to warn about the intense heat being registered at the moment and especially about the causes of it and the possible solutions that could give a palliative turn to the environmental situation," said the WWF Communications Area.

The action aims to draw people’s attention to one of the most important issues of current Paraguay: the high rates of deforestation in the recent years.

“We needed something impactful to bring attention to this very serious matter. And it is working; everyone is talking about it in Paraguay and most importantly learning which are the little changes we can make to help our planet,” adds Camilo Guanes, CEO of Oniria\TBWA.