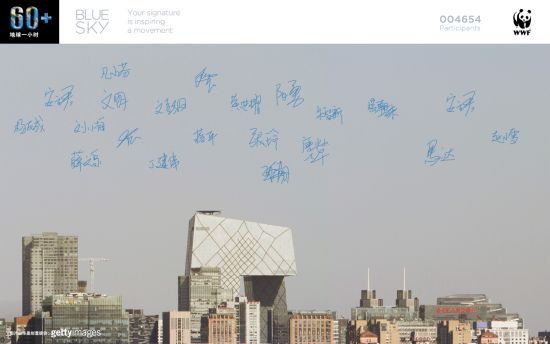 clear blue skies with a simple finger wipe. Users can share the before and after pictures on their WeChat

Moments and Sina Weibo (Chinese microblog). In addition, the app invites users to pledge against air

pollution by signing their phone screens and sending their signatures to the WWF website, where all

on March 29 at 8:00 pm at The Place (Shimao Tianjie), a popular shopping destination in Beijing with Asia's

largest outdoor overhead screen. After signing a pledge of support through the app, Li Bingbing’s signature

will be projected onto the overhead screen to inspire others to action. Shoppers and passersby can also

pledge to the movement by signing their own names through the “Blue Sky” app on one of several iPads onsite.

into blue skies from a mosaic of blue signatures.

share across their own social networks. The team is engaging social media influencers and celebrities in

percent penetration rate this year, an innovative and meaningful mobile app can make a big difference in

helping us reach more Earth Hour supporters in China. This is why our partnership with O&M is so

important. They've helped us introduce a digital and social element that can engage millions of people to join

Doug Schiff, Executive Creative Director of OgilvyOne China, said, "Many in China feel only the

government can improve the worsening air conditions, but WWF wanted to encourage individuals to think

up and support individual initiatives, and this app is a step in that direction."

Born in 2009, Earth Hour has become the biggest public engagement event in China, taking place in a

variety of historic landmarks such as the Bird’s Nest and the Great Wall, with those locations showing

support by turning their lights off. The yearly event has also broadened in message and relevance, with the

struggle with air pollution being a key focus this year.

The “Blue Sky” app is available in English and simplified Chinese. It is now downloadable through the App

Store and is compatible with iOS 6.1 and later.