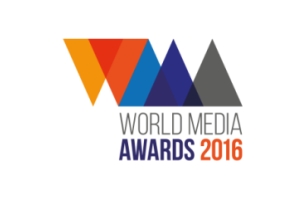 The World Media Group has launched the World Media Awards - the first ever global media industry Awards to celebrate the best in content-driven communications campaigns that have truly international reach; call for entries are from today, 16th November.

Nicolas Sennegon, President of the World Media Group and Global Managing Director at The Economist, explains, "There are many highly creative media campaigns being developed to reach the influential international consumer which successfully use rich customised content across borders. However, until now, there has been no Awards programme to pay tribute to these. The launch of the World Media Awards will plug this gap and create a benchmark for the best in international, content-driven communication strategies."

How to enter: Brands and their media, PR and creative agencies are eligible for entry, which will open on Monday 16th November and will close on Thursday 21st January 2016. To qualify for entry, at least 75% of the campaign must have been implemented in 2015 and it must have targeted audiences in at least four countries. For the first year, fees for entry to the World Media Awards have been waived, making it totally free to enter. The Awards website (www.wm-awards.com) has also been designed to make input and uploading of entries as simple and quick as possible.

About the jury: The Awards will be judged by an independent jury of heavyweight industry experts from advertisers, agencies and media owners. This mix reflects what is at the core of the World Media Awards - how collaboration between brand, agency and media owner is essential for successful content-driven communications. For the same reason, the jury will be presided over by three Co-Heads, Alex Altman, Managing Director at MEC Global Solutions, Chris Carmichael, Global Head of Media at HSBC and Matt McAllester, European Editor at Newsweek.

The jury will be looking for successful, innovative campaigns that demonstrate an understanding of the power of great content in reaching international audiences. For print, this can mean inviting a more focused and in-depth engagement from consumers or telling stories through rich imagery. For digital, mobile and video it is where more personalised interactions and shareability are encouraged and for live events or broadcast it is where content injects additional impact.

Altman comments, "International content-driven marketing campaigns are complex to implement and the elusive and influential international target audience is a difficult one to engage with. That's why I'm excited to be playing a role in the first World Media Awards which are the first to truly recognise this. I can't wait to see the entries and have no doubt that there will be world-beating innovation and creativity on show."

Categories: There will be seven Award categories, and a Grand Prix selected by the jury from amongst the category winners, as follows:

· The World Media Award for Travel and Tourism

· The World Media Award for Technology and Telecoms

· The World media Award for Automotive

Awards event: The winners of the Awards will be announced at the exclusive World Media Awards Reception which will take place on the evening of Wednesday 16th March at The Ham Yard Hotel in Soho, London. Attendance will be free, but by invitation only. The invitation list will comprise all shortlisted entrants along with a select group of international advertisers.

As well as receiving a prestigious trophy, the victors will also receive recognition of their success through announcements listing all the winners being published across €500,000-worth of international media space within all the World Media Group brands.