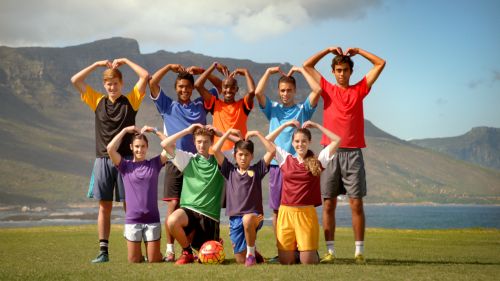 Filming took place in South Africa, as Farah hosts a fun football session in front of a breath-taking mountainous backdrop. The world champion, a long-term brand ambassador for the healthy lifestyle product, highlights that Quorn is not only delicious but also a healthy source of protein.

The post-production brief was to create a dynamic, impactful spot and ENVY was involved in the project from early on in the process, assisting in the development of the pre-production and concept stages of the campaign.

Mawhinny Collins wanted to showcase the latest Quorn range with a, fast paced and informative film so ENVY’s Offline Editor, Alex Lea, used quick-cut sports spots as his inspiration throughout, commenting: “As always, it was a joy to work with Billy, Simon and the team at Royle. The edit needed to have an energetic, healthy, but fun feel to it and thanks to some lovely vibrant rushes and Mo's infectious enthusiasm, which seemed to spread to everyone involved on the job, I think that shines through in the final spot.” The spot was further enhanced with a beautiful warm grade from Nuala Sheridan before being polished in Flame by Kieran Baxter.

Creative Director Mawhinny said: “I've been working in advertising since Madmen roamed the Earth. What ENVY have managed to keep alive is that rich collaboration that creatives love and more than anything, that "Can Do" attitude that makes absolutely anything possible. I love working with them… and they even do a great breakfast!”