Work of the Week 347 Add to collection

Featured in this collection of the past week's top creative; a defiant response to the overturning of Roe v. Wade, Sesame Street educating about vaccines, a touching NHS recruitment campaign and more 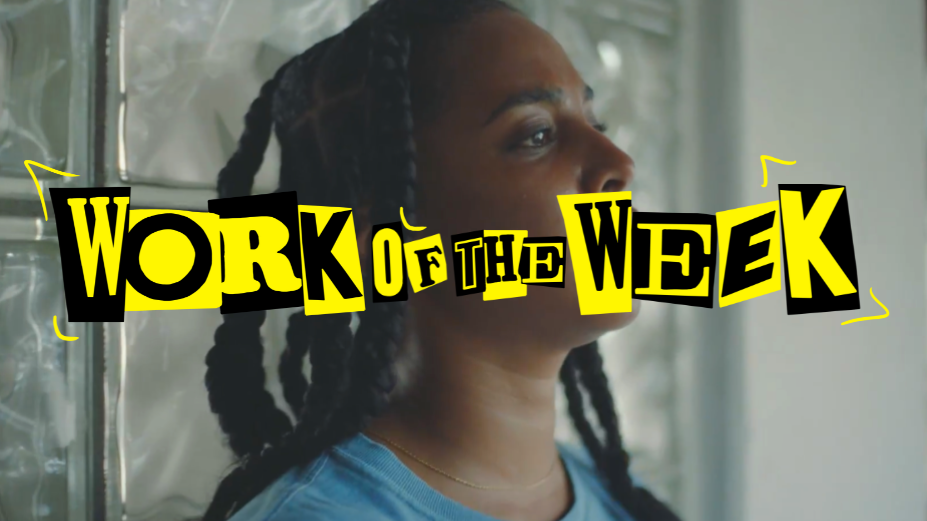 Over the past week, some of the finest pieces of creative work have focused on healthcare - from nurse recruitment drives to vaccine education and opposition against weakening healthcare accessibility for women. Including Amnesty International's global campaign that underpins the need to protect the right to safe abortions, in the wake of the overturning of Roe v. Wade in the States, and VVCP Health's ‘The Chemo Show’ spot for its 'Humanizing Health Awards Program' campaign, these creative healthcare highlights have crafted some truly emotional, defiant and informative stories to support the systems, frameworks and rights that support us.

As well as these impactful and poignant healthcare-related campaigns, this week’s selection of the top creative work includes Hippo Home Insurance giving the power back to home-owners, Vodafone taking on the theory of time itself, Ant and Dec getting down with the kids for Santander, and a whole town chasing down an escaped, winning lottery ticket.

To see each of this week's chosen spots that stood out for their creativity, effectiveness and memorability, read on below.

After Roe v. Wade was overturned by the Supreme Court in the US this week, threatening Americans' rights to safe abortion, Amnesty International teamed up with Anorak / NoA to create a global campaign to underpin the need to protect this right. Featuring a lyrically altered 'Star Spangled Banner' as the backing track to this vital campaign, Norwegian ad agency, Anorak, and NGO Amnesty International represent the States as no longer being the 'land of the free' by showing the stories of four women and girls who are facing the consequences of strict abortion laws.

Read more.
Great Guns’ director Duncan Christie collaborates with VCCP Health and pharmaceutical company Teva to capture the magic of ‘The Chemo Show’ - a moving film that demonstrates how spirit-raising interactions can lighten the tiring monotony of chemotherapy. Showing a day in the life of a patient undergoing chemotherapy, the spot aims to celebrate the broad community of people that support cancer patients and motivate them whilst they go through a painful and often isolating period of time. Working with a sensitive topic, the piece respectfully and masterfully walks the line between an unfortunate reality and the optimism and joy that people can bring to someone who is suffering.

Read more.
Addressing another healthcare-related topic, Sesame Workshop, the Ad Council, COVID Collaborative, CDC and the American Academy of Paediatrics have collaborated to provide answers to parents' questions on vaccines for children aged six months and up, assisted by a couple of familiar, furry faces. Sesame Workshop, the non-profit educational organisation behind Sesame Street, used its iconic character Elmo and his father Louie to inform parents about the importance of covid vaccinations. The spot has the wholesome, family-friendly approach that viewers expect from the educational programme and encourages viewers to talk to a paediatrician or healthcare provider for the latest facts about the vaccines.

Read more.
2050 London and My Accomplice have crafted a soul-stirring portrayal of what it takes to be a neonatal nurse by challenging potential future recruits with the question: ‘Could you?’ The 90-second film illuminates the many multi-faceted and highly skilled abilities that neonatal nurses must possess to do their job - from performing a transfusion with only five millilitres of blood through a vein the size of a hair, to teaching a bewildered dad how to change a nappy without disturbing any IV tubes. Rooting the campaign deeply in authenticity, the hope is to inspire people to take on the acute challenge of the neonatal career pathway and attract a fairer share of the developing talent in the NHS and beyond.

Vodafone Tackles the Theory of Time for Smart Network Launch

Read more.
Using the words and voice of Stephen Hawking, DDB Aotearoa and FINCH highlight the pace of change in the modern world to launch Vodafone New Zealand’s upgraded mobile and broadband network - 'The Smart Network'. First proposed by Einstein, and later articulated by Stephen Hawking, the concept of the 'slipperiness' of time is one that can inspire many creatives, especially after the last few years where time's passing has never felt so slow whilst simultaneously flashing before our very eyes. DDB Aotearoa and FINCH juxtapose slow motion and sped-up footage in this wonderfully evocative spot to highlight the communal effort of small changes that result in grand evolutions in society.

Read more.
For this homeowner-empowering collection of spots, insurance company Hippo worked with its creative partner agencies Preacher and Partners in Crime to launch a new brand campaign, ‘Feel the Housepower.’ In the 60-second anthem spot, we see homes being devastated by the horsemen of the apocalypse, reeking havoc on unsuspecting and uninsured home owners. Each spot warns of the dreaded surprises and anxiety that comes from homeowners not being insured and being unable to protect their houses in times of need - demonstrated in the campaign through, burst pipes, other plumbing incidents and, yes, a horde of cloaked demons.

The latest instalment of the ‘Bank of Antandec’ campaign sees Ant and Dec return to their roles as fictional banking CEOs. This time, they’re attempting to teach children money confidence. After some slightly questionable suggestions and financial advice from the double act, Santander saves the day with its Twinkl partnership that has committed the bank to providing free and curriculum-friendly financial education to kids at home and in school.

Directed by The Bobbsey Twins from Homicide, this campaign for National Lottery operator, Camelot, focuses on the joy that winning gives not just to one person, but to a whole community of people, marking a new chapter for National Lottery advertising. The new spot, which sees an entire town chasing after a windswept winning lottery ticket, tells the story of how amazing things can happen to a whole host of different people through its winners and thanks to the £30 million per week that the National Lottery raises for good causes. Filled with the usual British sense of humour and an uplifting message about community, the spot reflects the togetherness that will be felt across the nation as it airs during the Women’s Euro 2022 tournament and this year's Commonwealth Games.