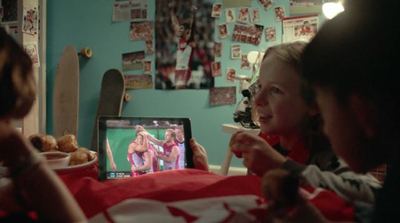 To celebrate its third year of supporting AFL, Woolworths is launching a new integrated sponsorship campaign, 'Feeding your hunger for Footy' via M&C Saatchi, Sydney.

Woolworths is the official supermarket and fresh food partner of the AFL. 'Feeding your Hunger for Footy' puts fans at the centre of the campaign, connecting them through celebrating the rituals of Friday night footy and the unique language and humour of the game.

Commentary throughout the campaign is courtesy of veteran AFL broadcaster Denis Cometti. Eagle eyed fans will spot Women's AFL players Katie Brennan, Darcy Vescio and Nicola Stevens enjoying a girls' night in for the game in the TVC, as well as Jake Sidebottom, Tom Hawkins and Josh Kennedy across the sponsorship campaign.
Says Andrew Hicks, director of marketing, Woolworths: "We know that watching the footy on a Friday night with friends and family at home is a favourite pastime for many of our customers. Through this campaign we aim to share their passion for the game, and celebrate how Australians come together over food to cheer their favourite team on."

Says Tom McFarlane, creative partner, M&C Saatchi: "AFL fans have been starved of footy action. Timed to coincide with the men's opening rounds and the inaugural Women's grand final, Woolworths are going to make sure they don't go hungry for a minute longer with this fun campaign."

The campaign will run across the Channel 7 broadcast partnership, 30 second TVCs, OOH, radio, digital, in-store POS, digital discovery and social, as well as at the games throughout the season at the Woolworths Playgrounds across various grounds in Melbourne.