Woolworths Celebrates Christmas With a Street Party in New Campaign 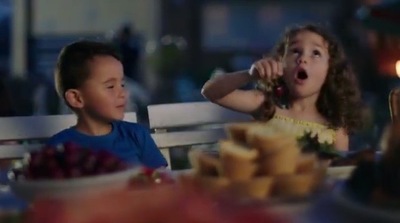 Drawing upon Australians' love of Christmas, the 30-second 'Street Party' TVC hero's five year old Holly's sheer delight in having her street gather for a day of feasting before huddling together for the highly anticipated switching on of the Christmas lights.

Accompanied by the tagline, 'That's why I pick Woolies for Christmas', the campaign explores the important role fresh food and community gatherings have for Woolworths customers over the Christmas season.

Says Tom McFarlane, creative partner, M&C Saatchi: "The power of a genuine brand platform is that you can stretch it. We didn't need to start again for the festive season. Instead we built on our positioning line, 'That's why I pick Woolies', by simply adding two words - 'That's why I pick Woolies for Christmas'. And little Holly is the perfect character to remind us of the magic Christmas brings."

Says Andrew Hicks, director of marketing, Woolworths: "Australians love Christmas and 'Street Party' celebrates the joy and fun of the season, and the rituals our customers take part in. This is a time of year when we celebrate together and we hope the campaign will provide further inspiration for Aussies to create delicious festive dishes that play an integral part in bringing families together."