Wonder How Skateboards Are Made? It's More Awesome Than You Think

Editors' Choice: Filmmaker Stacy Peralta takes us inside his and his partners' skateboard factory Powell-Peralta 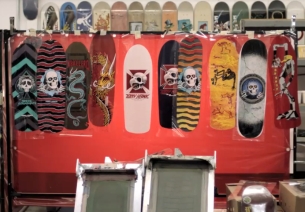 The film is not technically a commercial, nor is it a piece of branded content. “It’s a labour of love,” says Peralta. “This film is about Charlie and the Chocolate Factory. That’s who George Powell really is. He’s an inventor and an entrepreneur, and after all these years he’s still a kid.”

Peralta revolutionized skateboarding first as an innovative pro-skateboarder and secondly in 1978 as a co-founder with George Powell of Powell Peralta, the first skate shop to sponsor skate stars like Tony Hawk and turn skateboard graphics into a fine art. Stacy later transformed himself into an entrepreneurial commercial director, picking up his first camera to shoot “Bones Brigade” videos to promote Powell Peralta. Today he is a celebrated documentary director with many Sundance awards and a prolific commercial director with Nonfiction Unlimited.

"So few people, including skateboarders, really have any idea of what it takes to make something as simple as a modern skateboard or even a single urethane wheel,” says Peralta. “George Powell is one of the very few skateboard builders in the world today who still manufactures his products in America under one roof just as he has always done, and so I was inspired to make this short film on him and his company Skate One and to share it with all of you."