This week a different kind of petition was launched on YouTube: The Dislike Petition. The Task Force and Shalmor Avnon Amichay/Y&R... 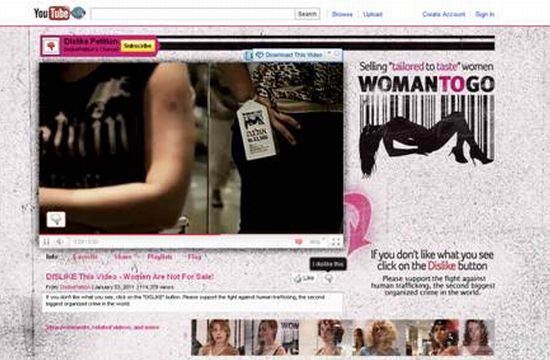 Task Force on Human Trafficking
THE YOUTUBE DISLIKE PETITION
Human trafficking is the second-largest organized crime in the world.
Every year over one million women are traded worldwide.
This week a different kind of petition was launched on YouTube: The Dislike Petition.
The Task Force and Shalmor Avnon Amichay/Y&R Interactive advertising agency, in collaboration with Guy Dayan  (who specializes in creating and promoting YouTube channels and videos) have launched The Dislike Petition.
The YouTube Dislike Petition includes a video showing an apparently legitimate situation  in which a man arrives at the WomenToGo Store (the same store that opened in Dizengoff Center) and "purchases" a woman.
Surfers watching the video are invited to press the "Dislike" button, a custom Youtube feature (contrary to the famous "Like" button). Pressing the Dislike button, the surfer votes against the scenario featured in the video and shows he supports the fight against Human Trafficking.  The video was also broadcasted on TV channels.