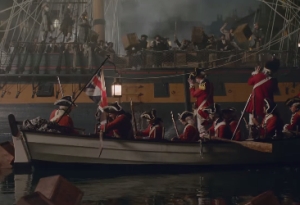 For the first time ever, TurboTax is offering taxpayers all across America who file a simple return, the chance to file their federal and state for free. It’s the biggest thing to happen to taxes since the Boston Tea Party. So, for the brand’s second foray into America’s biggest football game, director Noam Murro dipped into the history books to recreate a cold winter night in Boston harbor, albeit with a slightly different ending.

The 60-second commercial, titled “Boston Tea Party,” aired in the first quarter of the game.

There are 60 million Americans with simple returns, and they tend to file early in the year. The Super Bowl provides an opportunity to reach a large, captive audience about the benefits of preparing and filing taxes with TurboTax during one of the busiest tax filing weekends of the season.

This effort is part of a larger brand campaign (television spots like “Wedding” and “Shrimp”) that position taxes as the story of your year—just much simpler. The creative seeks to show that although life is complex, doing taxes with TurboTax doesn’t have to be because simple questions guide people step by step through all the amazing and sometimes crazy changes that happen during their year.