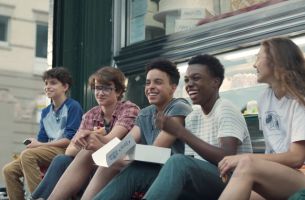 Samsung's new 'A Perfect Day' spot is a film about a young group of friends who set out to make the most of their day. The kids are able to explore the city through a new lens, with help from their new Samsung gear. Whether its showing off their skate moves from all angles with the Gear 360 camera or showing a bodega owner a new world through the Gear VR headset.

They can even check in with their parents to make sure they are home on time with the Gear S3 watch. The film, created by W+K Portland aims to show that throughout their day Samsung is right by their side.

Song: Pixies’ “Where Is My Mind” performed by Nada Surf