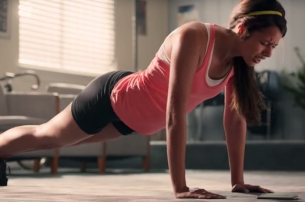 This week Nike is launching a women's effort called #betterforit to inspire women to be active, take on new challenges and conquer personal goals.

This stands out as Nike's largest initiative to support and motivate a women's athletic journey, inviting a global community of athletes to push themselves further, whether it's a personal best in their latest marathon or a weekend run.

The initiative harnesses the bold voice of women today and addresses the dynamic world of sport and fitness with a lighthearted tone and humor through a series of short films. The first film is called "Inner Thoughts," which aired Sunday night during the MTV Music Awards.