Editors' Choice: Psyop tells the story of a man & his dog with an impressively animated spot 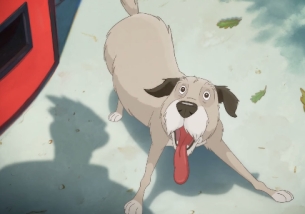 “Let me always be the person my dog thinks I am.” A change in perspective can make all the difference in the world. This spot features an unnamed man on a walk with his dog through a rainy gray park. The man is clearly going through the motions, ready for the chore to be done.

His happy-go-lucky dog, on the other hand, finds an opportunity for joy in nearly everything he sees. From the dog’s perspective, this walk is the adventure of a lifetime. With a boost from a well-timed bottle of Coke, our guy finally sees what his best friend has known all along: the world is a pretty amazing place to be.

Every single frame in this spot was hand-painted. It was a difficult process. There were two boardomatics and a previs before pencil ever touched paper. Once the storytelling was done and locked, a small army of artists roughed out thousands of pencil sketches, blocked out the character movements and then took each cel, frame-by-frame, to final ink and paint. Color trails, shadows, smoke, dust and highlights were also added during final animation. The 2D phase alone took more than 10 months to complete. After that, a select few of the hand-painted elements were projected across 3D geometry software (Nuke and Maya), adding a level of dynamic light and shadow. This combination of classic cel-animation mixed with modern software engines helped tell this simple, timeless story in an exceptionally vivid and fresh way.
view more - Creative