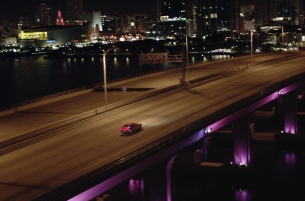 Few new vehicles have generated as much excitement and anticipation as the 2015 Dodge Charger SRT Hellcat and Challenger SRT Hellcat – the fastest, most powerful muscle cars ever – and now Dodge is capturing the energy of these two vehicles, as well as the brand’s flagship supercar, Dodge Viper GTS, in two new spots debuting on the large- and small-screen, beginning July 3.

“We don’t build Hellcats or Vipers for high volume, we build them as brand positioning statements,” said Tim Kuniskis, President and CEO, Dodge and SRT brands, FCA US LLC. “These vehicles may be a small percentage of our overall sales but they send a very strong message about the brand personality and attitude.”

“Predators” is about how these three cars are modern beasts that trigger a deep, visceral feeling. While everyone is inside sleeping, the roads become a wide open playground. The90-second spot opens on dark roads and empty streets as the voiceover says, "We don’t have to worry about predators like our ancestors did. No sabre-tooth tigers stalking from the brush … no dire wolves circulating the camp.” Set to the music of the classic '80s song, “In the Air Tonight,” the sinister quality of the city bleeds into a visually arresting landscape as we see the Dodge Charger SRT Hellcat, Challenger SRT Hellcat and Viper GTS racing through the landscape at night, when they have the freedom to drive as the vehicles were meant to be driven.

The voiceover continues, “There are no more monsters to fear, so we have to build our own.” Viewers see a “707 Horsepower” super over images of the Charger and Challenger and “Top Track Speed of 206 MPH” over the Dodge Viper. The spot closes with Hellcat, Dodge and Viper logos.

The spots were filmed in Miami over three nights and every image in the commercial was shot, including the alligator that morphs into the front of the Challenger SRT Hellcat. The boat scene was captured from a helicopter, drones were used in production and, instead of the usual pursuit vehicle to shoot car to car, a camera was mounted to another Hellcat, as nothing else could keep up with the speed.

The ads were created in partnership with Portland, Ore.-based independent advertising agency Wieden+Kennedy.