Editors' Choice: Agency launches next round of 'Be Moved' campaign introduced earlier this year 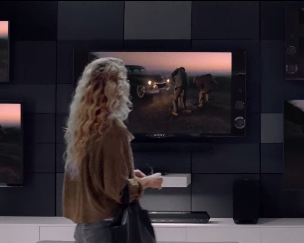 W+K Portland and Sony have shared the latest round of work as part of the "Be Moved" campaign introduced earlier this year. As consumers move into the holiday purchasing season, various TV and digital executions will focus on reminding people what makes the brand so special.

Sony is the only consumer electronics company integral to every aspect of people's entertainment experiences. Not only do they create amazing content—from movies to music to games—they also make the products in which people consume and enjoy them. This plays out in the 60-second brand spot "Script to Screen" debuting this week.

Also airing are two product-focused spots, "If A Tree Falls" for the Sony Sound Bar, and "Roof" highlighting the Playstation 4 Remote Play feature via the Xperia Z3v.

The campaign continues with high-impact and culturally-connected entertainment partners such as Google, IGN, Variety and VEVO.

For example, in partnership with media agency UM, Sony Electronics will team up with Variety to produce a digital experience that celebrates how the brand's devices have been a mainstay of global popular culture throughout the decades, going back to the 1960s. Later this week the Variety.com home page will feature an interactive slider that allows users to go back in time and revisit a selection of memorable news reports curated from Variety's archives over the past five decades.