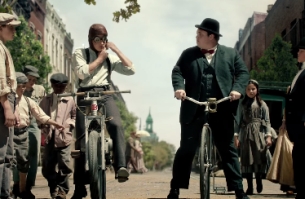 The spirit of John and Horace Dodge continues to live on as Dodge debuts four new ads in its popular Dodge Brothers campaign directed by Academy Award winner, Adrien Brody.

The spots capture the brothers' passion for making great cars and how their vision for the future is still what drives the Dodge brand today, as exemplified by the 2015 Dodge Dart, Durango, Charger and Challenger vehicles.

To continue telling their story, W+K Portland went back to the beginning. Before they founded their company, before they manufactured car parts, before they were out of their teens. All the way back to the very first vehicle they ever built, a bicycle.

Legend has it after seeing another local kid's new bike, they set about making their own. W+K used this story to show how innovation and entrepreneurial spirit has been a part of Dodge since before the beginning.

In another spot, a collaboration with BeatsAudio, the rivalry between Detroit's high society and the Dodge Brothers is brought to life in a fun way.