Following social experiment at JFK airport, customers are tested on their doorsteps 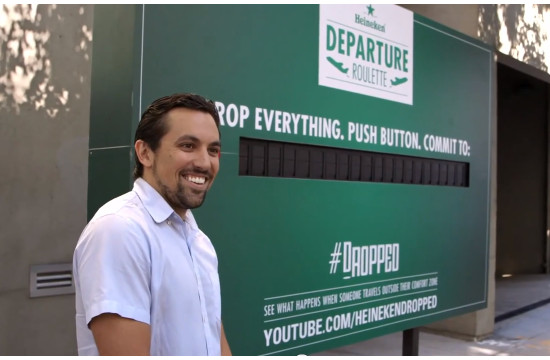 After positive boasts online, imagine if someone showed up at your door asking you to spontaneously push a button to take a trip to an unknown destination. Would you play Departure Roulette and go? To find out, Heineken took to the road with "Departure Roulette" - a social experiment that aims to push people outside of their comfort zones, crossing their borders for experiences unknown.

The Departure Roulette Roadshow follows the initial social experiment at JFK that aimed to reward spontaneity and capture the genuine moment of facing an instantaneous decision.  Heineken followed and started conversations with people online who commented that they would press the red button on the old style flight clicker board if given the opportunity.  Heineken arrived at the doorsteps of fans in San Francisco, Los Angeles, and New York, presenting them with the Departure Roulette challenge to push the button and immediately embark on a trip to an unknown place.

“There is a little bit of this curiosity in all of us, and we believe that Heineken consumers are especially open to adventure and the unknown,” said Belen Pamukoff, Brand Director, Heineken. “At Heineken, we aim to provide opportunities for fans of our premium beer to embrace the thrill of spontaneity, go far beyond their comfort zone and open their world.”

Destinations of "Departure Roulette" challengers included adventurous locations like New Zealand, Spain, Romania, Estonia, Chile or Peru. The inspiration for the social experiment was ‘Voyage’, a Heineken® campaign that took different men from across the world and dropped them in remote global locations with nothing but the most basic of supplies and directions. The result was ‘Dropped’ - a series of episodic adventures following the intrepid explorers on their legendary travel experience. Additional details can be found on the Heineken Dropped YouTube page: www.youtube.com/heinekendropped.

To join in the conversation, follow Heineken @heineken_us, #dropped.