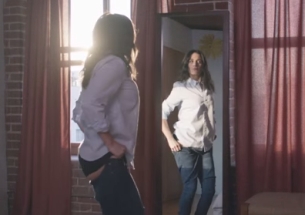 Gap, the iconic American clothing brand, will debut an innovative "Micro-Series" developed specifically for Instagram. The series consists of 12 short films, each only 15 seconds long, that tell a surprising love story between comedian and "Marcel the Shell" creator Jenny Slate and indie actor Paul Dano, in his commercial debut. One episode will be released each week during the Spring season, beginning this week.

The films build on Gap's recent history of partnering with acclaimed directors to tell stories that will relate to customers' lives.  After creating more traditional, broadcast commercials with David Fincher and Sofia Coppola last year, the brand has partnered this season with 'maverick' directors The Daniels to create a purpose-built story for Instagram.

Premiering today on Gap’s Instagram account, http://instagram.com/gap, the Micro-Series tracks the burgeoning romance between the love struck duo of Slate and Dano, as they navigate chance encounters, first dates and moody Spring weather in the hope of finding their perfect fit. As they grapple with what is real and what is digital "content," they begin to suspect that their lives may not be theirs alone.   Viewers will need to stay tuned as each short film is released over the season to see the story unfold.

The films feature Gap’s key trends of the Spring season, which are integral to the events in each episode – form-fitting Resolution Denim, the new Spring-ready Khaki, and the go anywhere Jogger Pants – to showcase weather-proof and heartbreak-proof, outfits.

In addition to Instagram and other digital platforms, the love story will be released on dating websites and apps. A companion promotion called #APerfectFit will offer viewers special rewards for trying on the new form-fitting Resolution Denim featured in the Micro-Series.

"We are excited to further innovate our marketing approach and introduce a series that not only is inspired by social, but reflects its zeitgeist – where the lines between real and created events are increasingly blurring," said Tricia Nichols, Global Consumer Engagement and Partnerships for Gap.

"In each episode, we bring to life those first days of Spring that can feel a bit surreal as our couple's real lives and Instagram lives start to merge into one.  We think people will relate to the storyline, while also getting some help navigating the tricky territory of the perfect first-date outfit, especially when Spring's weather can be so unpredictable."