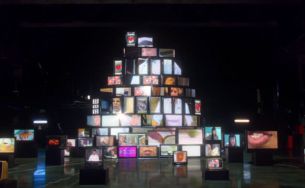 The bold new campaign – created by Wieden+Kennedy London – will tackle this ‘cooking paradox’ by rousing audiences to turn their screens off and ovens on, demonstrating in true Lurpak fashion that consuming food culture is a poor substitute for the visceral experience of cooking.

Directed by Daniel Wolfe and continuing the ‘Good Food Deserves Lurpak’ narrative, the ad opens on a sculpture of TV screens, laptops, phones and cookbooks capturing food culture in all its forms created by Fraser Muggeridge.  Viewers are drawn in by the omnipresent sound of Rutger Hauer reminding them “nothing compares to the thrill of a hot kitchen.” As the pile of food entertainment is suddenly blown up, Hauer boldly proclaims “You’re not a cook until you cook."

Viewers are then transported from watching, reading and hash-tagging food culture to being immersed in the energy and rhythmic chaos of a hot kitchen. Otherworldly food shots have been replaced with more down-to-earth portrayals styled by Katie Giovanni.  Lurpak’s slick approach has evolved into a grittier, emotive take that brings realism, excitement and sweat back to the kitchen. The ad concludes: “Strap on your aprons and reach for the Lurpak."

Christian Fischer, Lurpak Global Brand Director, Arla Foods UK, comments: “We’re constantly bombarded with food culture. Cooking has become entertainment and we’re doing it less than ever. That’s why we’re stirring a cooking revolution with “Game on, Cooks” and rousing ‘sofa-chefs’ back into the kitchen. Consuming food culture doesn’t compare to the sights, sounds and tastes of the kitchen, so it’s time to stop spectating and start cooking with Lurpak.”

Creative Directors, Freddie Powell and Hollie Walker at Wieden + Kennedy, were thrilled to continue their work with Lurpak. Freddie added: “We just feel lucky to work with such brave clients who continue to push Lurpak to new and unknown territories. Plus, we got to blow up a mountain of TVs."

The ‘Game on, Cooks’ TV ad is part of a multi-million-pound marketing campaign that also features shopper, press, digital and PR.