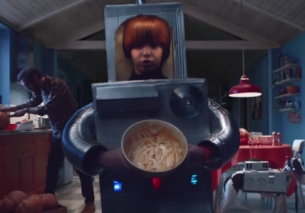 Dishwashers have so much thrown at them day after day, season after season. Finish knows that cleaning dishes is a dirty business and those taken-for-granted dishwashers need cleaning too.

The aim of Finish’s new campaign, created with agency Wieden+Kennedy London to promote the brand’s Dishwasher Cleaner product, is to make consumers think (for the first time) about the cleanliness – or indeed the dirtiness – of their machine by reminding them of the amount of dirty, greasy, sticky dishes they throw at their dishwasher, day in, day out.

The ‘Who Cleans The Cleaner?’ film launches on 10th August 2015 and will feature on such programmes as Coronation Street and This Morning, and is Wieden+Kennedy London’s second campaign for RB’s Finish brand since winning the account in 2014.

The campaign is based on the insight that there is a low awareness amongst consumers that dishwashers themselves need to be cleaned. The ‘Who Cleans The Cleaner?’ spot aims to spur them into action, by bringing viewers’ attention to the dishwasher itself in an innovative way by asking “Who cleans the cleaner?”

The film imagines what a year of dirty dishes looks like for a dishwasher. From the point of view of the machine, the same kitchen setting repeatedly glides towards viewers. Each time, they meet the same family, loading the machine with dirty dishes at different moments throughout the year.

From mucky breakfast plates in January, right through to sticky cake bowls at Christmas. The 30 second film continues the unique, dish-obsessed voice and playful visual style established by Wieden+Kennedy London’s first brand campaign, ‘Dishes.’ The story was brought to life by directing duo RBG6 through Friend, with seamless post-production provided by Time Based Arts.