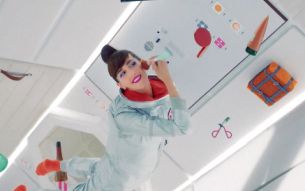 From the joys of biker ballet to the benefits of face cream in space, the new Autumn/Winter campaign from TK Maxx reveals how the labels-for-less retailer’s combination of designer brands at outrageous prices can take shoppers even further into the world of Ridiculous possibilities.

The latest TVC takes the TK Maxx proposition and puts it into orbit. Set in a Space Odyssey style space station, it centres on a female astronaut applying make-up in zero gravity who explains that because she discovered so many amazing affordable, big branded beauty items instore, she was able to kit out the entire crew - which resulted in them asking her to join them on their mission.