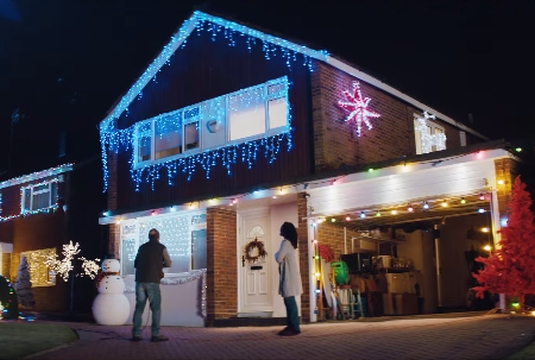 With an enormous light show, giant Santas and lots of sparkle, Tesco’s 2014 Christmas TV ad made its debut during the season finale of ITV’s Downton Abbey.

Featuring a brass band cover of Irene Cara’s ‘What a Feeling’, the 60 second ad created by Wieden + Kennedy London shows customers going to great lengths to prepare for the festive season and Tesco colleagues helping them every step of the way. This year’s ad features boundless festive spirit, showing Tesco is just as excited about Christmas as its customers are.

It begins with dad rummaging around the attic looking for boxes of decorations from last year. One by one we see families gathering to decorate their homes, while colleagues prepare to spread Christmas cheer.  The ad builds to the moment when Christmas lights are switched on in households and Tesco stores across the country.

The festive light show at the end of the ad is inspired by a Tesco customer, Claire Hannah, who last year tweeted her disappointment that her local store didn’t have a green hat. In response Tesco created a winter wonderland at the store and invited Claire and over 800 local residents to enjoy the festivities and turn on the Christmas lights.

The show, which culminates with the green hat being placed on the store, was created by the people behind the light show at the London 2012 Olympic opening ceremony.  Nearly one million LED lights covered a huge 78m long and 7.2m high screen in front of the store. The full light show and the crowd’s reaction can be seen in an additional film that Tesco is publishing on YouTube for customers.

The event at Wigan is just one example of what Tesco is doing this Christmas to help customers in whatever way it can, big or small. The campaign, ‘Every Little Helps Make Christmas,’ will celebrate the excitement around Christmas and focus on helping the nation in lots of little fun and useful ways. The green hat is an important visual motif and will appear on over 700 Tesco stores across the country, more than ever before.

Jill Easterbrook, Chief Customer Officer at Tesco says: “Christmas is a wonderfully special time of year and we want to help customers in whatever way we can. Claire’s experience is just one example of how we’re doing every little thing we can to help make Christmas in fun and helpful ways.We’re with our customers every step of the way through the festive season!”

Claire Hannah says, "I was taken aback when Tesco first approached me - I couldn't believe my tweet had been noticed. It's amazing, Tesco has done a really lovely thing for the town, and I’m so chuffed our Tesco has the green hat this year!"

Ray Shaughnessy, Creative Director at Wieden + Kennedy London says, “This year's campaign is an important step change for Tesco in that they are doing all sorts of unexpected things to help people have a brilliant Christmas. It won't just be about them making sure you get the best turkey on the table, it will be about making sure that people feel Christmassy too. Getting the team behind the London 2012 Olympic light show to light up Wigan is a great example of this."