W+K London is Cleaning the Cleaners in New Finish Campaign

The comical campaign will be accompanied by OOH and digital assets 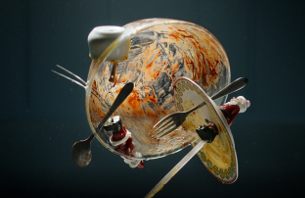 Rice pudding with fish soup. Broccoli smoothie with goat curry. Scrambled eggs with cat food. These are the sorts of combinations dishwashers deal with every single day. Breakfast dishes with dinner dishes, midnight snack dishes with lunch dishes – they all come together in one festering mess.

‘Combinations’ is the latest campaign from Wieden+Kennedy London for Finish Dishwasher Cleaner, set to get people to consider the cleanliness of their own dishwasher. Building on the 2015 Dishwasher Cleaner work, the campaign for 2017 continues asking ‘Who cleans the cleaner?’, yet focuses instead on the uniquely gross combinations that end up being washed every single load.

The campaign is led by a captivating film, directed by The Sacred Egg, along with seasonal cut-downs featuring topical dishes which will run throughout the year. Striking OOH and digital assets are also set to support the campaign. ‘Combinations’ is set to air in the UK this January before rolling out globally during the next few months.

Carlos Alija and Laura Sampedro, creative directors at W+K London said “This is the latest in a string of campaigns for Finish since winning the business in 2014. It stays true to the unique dish-obsessed perspective and playful visual style - but brings the message home in a disgustingly beautiful way.”