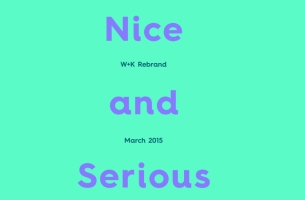 Working together with Wieden+Kennedy, ethical creative agency Nice and Serious has launched a new brand identity. Designed to be an adaptable and sustainable identity that can react in response to new developments in the field and work across all brand communications, the rebrand reflects the company’s nice and serious values: creating beautiful things to solve serious issues.

Nice and Serious partnered with London-based creative agency Wieden+Kennedy to develop the new brand system, which encompasses a new logo and identity concept, to be applied across the company’s website, social media channels, end frames, signage and stationery, and carried through to the brand’s tone of voice.

Wieden+Kennedy sought to help Nice and Serious tell a story through their identity. The first stage of the rebranding process involved establishing Nice and Serious’ brand values, aiming to build a brand rather than just a new marque. The agency’s aim in designing the rebranding was to create something that could be handed over to Nice and Serious so that they, as a creative agency, could develop and take ownership of the identity.

The new brand identity system underscores the company’s approach, whilst standing as a simple and flexible visual connection between Nice and Serious’ values and each project’s narrative. This identity represents the nice and the serious, and the relationship between the two. Whilst the typography stays constant, the central area, where the two elements overlap, is where the action happens.

The central area is an ever-changing window, a live area which allows Nice and Serious to visually showcase what the company is all about. It’s a space to tell a story through illustration, showcase a piece of work, or educate people in the form of a beautiful infographic.

Sophie Bodoh, creative at Wieden+Kennedy London, says “We wanted to create an identity that gives meaning to their name and connects their values with the work Nice and Serious do. A company with sustainability at its heart needs an identity that is sustainable, so that it can react to the world as it changes.”

Simon Elvins, designer at Wieden+Kennedy London, explains the purpose of the changing element within the logo “It was devised in order to create a more sustainable identity, that can grow, flex and change as the issues do, particularly in a field which is always changing.”

Tom Tapper, creative director and founder of Nice and Serious reflects on the process and outcome, “When we first started working on our identity, we obviously wanted the logo to reflect our personality, but everything we designed felt too restrictive. W+K helped us realise that we express our ethical values through our work. So the identity they created let our work do the talking. The active area that sits at the centre of the logo changes to show what we’re focussing on at the moment. So in that sense, our new identity is truly sustainable.”

In a continuing collaboration with Wieden+Kennedy, Nice and Serious’ rebrand will extend to the physical space as well, with the two companies collaborating on the design of the company’s offices.