Awards and Events 439 Add to collection 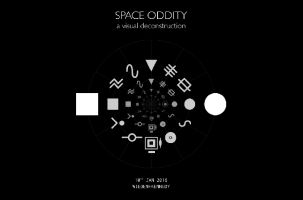 On the 10th January 2017, Wieden+Kennedy London will be opening Space Oddity – a visual deconstruction at their gallery space on Hanbury Street, in East London.

Space Oddity – a visual deconstruction uses data to create a tribute to the work of David Bowie on the one-year anniversary of his death.

Conceived by designer Valentina D’Efilippo and researcher Miriam Quick and curated by W+K, the project visualises musical data from Bowie’s 1969 track ‘Space Oddity’ as a series of 10 specially engraved records, with accompanying large scale art prints and projection. Each 12-inch disc deconstructs the track in a different way: melodies, harmonies, lyrics, structure and underlying story are all transformed into compelling visual imagery that inhabits the broken interstellar world of the song.

An innovative moving image piece will be projected into the W+K window space, taking viewers on an immersive journey through Bowie’s famous track. Generated directly from the recording, the image is precisely synchronised with the sound, which gives the viewer the uncanny experience of seeing and hearing the music at the same time.

Passers-by on Hanbury Street can interact with the installation by sending a tweet using the hashtag #canyouhearmemajortom and receive a personalised postcard.

Genevieve Sheppard, producer at W+K, commented: “Bowie was always looking ahead to integrate art and technology. With this exhibit, we seek to not only commemorate a great artist but also take inspiration for our own artistic exploration of his work. We are so pleased to join the topical conversation of Bowie that will undoubtedly take place in January and hope we leave viewers with a new appreciation for the artist and his work.”

Space Oddity – a visual deconstruction is being exhibited at the W+K London office from the 10th January until the 23rd January 2017.

The project website will be launched at oddityviz.com in early January and an Instagram gallery will be curated using the hashtag #oddityviz.