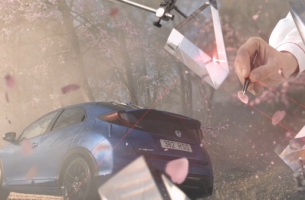 A new campaign from Honda is set to launch this spring, welcoming the new Civic family into dealerships across Europe.

Considering that the driving experience is the most important factor for Honda, the newly updated 2015 Civic family perfectly embodies this philosophy. The campaign supports the arrival of the 2015 Civic range, which includes the adventurous Tourer, the stylish Sport and the powerful Civic Type R.

Inspiration from the campaign arose from interviews with Honda’s project leader about the philosophy behind the new Civic. He captured Honda’s dedication to its customers’ enjoyment by saying, “Customers should not think this is a good car, but rather feel I can enjoy this car.”

Jemma Jones, Senior Marketing Communications Manager, Honda Motor Europe said, “This campaign is yet another example of how Honda likes to engage and inspire our consumers.  Our focus is very much to communicate in a manner which is innovative, imaginative and exciting.  From my perspective, I am delighted how we have created something which achieves these aims and hopefully becomes highly  memorable in consumers minds.“

The campaign brings Honda’s philosophy to life in a hyper realistic world, suspending the cars and their surroundings in a state of near-arrested motion and setting the stage for Honda engineers to put their expertise to work. Revolving around three thrilling driving experiences, the engineers carefully manipulate the environment to create a maximum feeling of joy.  From positioning individual beads of water with precision behind the car, to gently adjusting a bird’s flight, no detail of the perfect moment is overlooked.

A 60 second TV spot directed by Johnny Hardstaff with VFX by MPC, launched 1st May.

The launch film is accompanied by three 20 second spots, each concentrating on one of the three new Civic models, and an accompanying print campaign.

Scott Dungate, Creative Director at W+K London said, “A lot of painstaking engineering goes into designing a car at Honda. They obsess over everything, from the wing mirrors to wireless connectivity. We wanted to show how this attention detail paid off ultimately for the driver, in an exhilarating driving moment.”

Johnny Hardstaff said, “Wieden+Kennedy and Honda have a history of creating interesting work together, constantly moving the visual language along into ever more progressive territory.  This new work is about the playfulness and the sheer craft that goes into creating not just the car but the driving sensation itself.  This is about performance.  This is a new direction.  I feel very flattered to have been a part of that.”