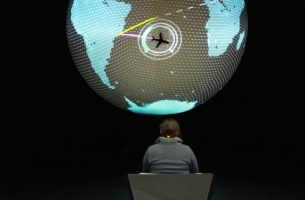 What if you could actually fly to your dream travel destination using only the power of your brain? S7 Airlines, one of Russia’s biggest carriers, made this a reality with the Imagination Machine, a unique installation that uses EEG-technology to turn participant’s brains into game controllers.

Revealed last week at a busy Moscow mall, S7 Airlines’ Imagination Machine gave shoppers the opportunity to see how far they could travel with the power of their imagination. Part of the Russian airline’s recent - ‘Fly to any place you can imagine’ campaign, the installation put the wonders of the world in the grasp of anyone who could truly stay focused on their dream destination.

Created by Wieden+Kennedy Amsterdam in collaboration with Tellart, the Imagination Machine sees a participant steer a small physical plane on a large 2-meter projection-mapped globe with the power of their brain. Seated in front of the globe and having first been instructed to choose their destination, users are fitted with an EEG-brainwave headset that monitors brain activity throughout gameplay via a forehead biosensor and which determines a participant’s level of focus. This brainwave information is then sent from the EEG headset to the Imagination Machine’s algorithm that calculates the flight path in real-time to control and maneuver the plane.

Starting halfway around the globe, each participant had 45-seconds to make it to their chosen destination. Once the game begins two paths appear on the globe – the ideal flight path that takes you to your destination fastest, and a flight path that follows the user’s level of focus. The more focused a user is on their dream destination the closer the plane stays to the ideal flight path.  If a user gets distracted by the crowd or thinks about what they will have for dinner for example, the plane will veer off course. But if they could stay focused and guide the plane to their dream destination within the given time, a return trip to their destination is won.

Kelsie Van Deman, W+K Amsterdam Head of Interactive Production says: “Although measuring these tiny electrical impulses in your brain and calculating them in real-time to a flight path is incredibly technical, we focused throughout the creative process on keeping the end user experience very simple.  People didn’t need to understand the algorithms and mechanics behind the installation, they just needed to focus on their dream destination and we would fly them there.”

Matt Cottam, CCO at Tellart Amsterdam said: "It is incredible to live in a time when we can access almost every corner of our planet through sensors, video feeds and global communications that are practically free. Even with the highest-fidelity connections, the sense of virtual presence in a remote location will always pale in comparison to the real experience of being there–the sounds of a street, the smell of food, the light, the faces of strangers. The Imagination Machine combines sensing with a digital Earth and the exciting opportunity to travel the real world in all of its color."  The Imagination Machine stunt was held last week in Moscow’s Afimall City mall. Over 200 people took part throughout the day, with 50 participants winning a round trip to their dream destination along with 5,000 S7 Airlines miles. Those who took part, but who weren’t successful in landing their plane also walked away with 5,000 air miles.

S7 Group Chief Marketing Officer, Tatiana Fileva, comments: “The Imagination Machine was a way to really bring to life the idea behind our recent ‘Fly to any place you can imagine’ integrated campaign. The stunt demonstrates that dreams can come true if you are open-minded and can imagine strongly enough. And S7 Airlines, together with their oneworld alliance partners, can make your fantasy a reality and fly you to the place of your dreams”.

The Imagination Machine is part of the integrated ‘Fly to any place you can imagine’ campaign that launched last month and which aims to bring the wonder of flight to a new generation of Russian travellers. In partnership with oneworld alliance, S7 Airlines flies to over 900 destinations worldwide, truly taking travellers to any place they can imagine.