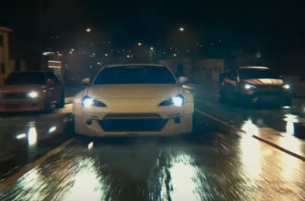 Created by Wieden+Kennedy Amsterdam, the new 'Need for Speed' reboot campaign kicks-off with ‘Paradise’ a 90-second film constructed primarily out game footage. The adrenaline-injected Need for Speed spot is the result of endless nights capturing by Ghost Games, internal production team, Mediaworks, and W+K Amsterdam directing the game’s hyper realistic next gen graphics, which allow the game to speak for itself.

The film showcases the fictional world of Ventura Bay, a place engrained in authentic car culture; a place where hitting insane speeds, sliding round corners in your customized ride alongside your friends and being chased by the cops is rewarded.

The racer’s paradise is aptly accompanied by a new arrangement of the Coolio track, Gangsta’s Paradise, soulfully played by an orchestra to bring a surreal sense of beauty to the insane domain of illicit street-racing. ‘Paradise’ is narrated with a dialogue from a counterculture ‘60s classic film ‘The Wild Angels’ delivered by Rebel Célèbre Peter Fonda.

The film is now live with versions running online, and which will be accompanied in coming weeks by a social activation.

David Smith, Wieden+Kennedy Amsterdam Creative Director, says, “Rousseau said, ‘Man is born free, but everywhere he lives in chains’. Our campaign says, forget the chains, let's get off the hook. It doesn't get more relevant than that."