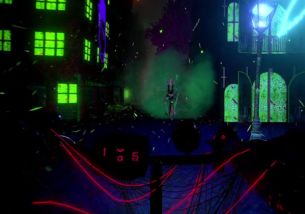 The banshees are out to get you this Halloween in ‘Bitmap Banshees’ - a VR thriller game installation created by Wieden+Kennedy Amsterdam.

Launching today, ‘Bitmap Banshees’ is set inside a future dystopian Amsterdam, where a gang of biker banshees have taken over the city and are out to get you. Players navigate a psychedelic science-fiction-slash-B-grade-horror-frogger reality, and try to survive the cursed banshees for as long as they can. Cycling around the virtual city players collect ‘carrotty’s’ - secret weapon collectables in the form of supernatural carrots, to throw at advancing banshees to disable them and prolong one’s life in the game.

The installation, which is housed in W+K Amsterdam’s public gallery space, includes a custom Mad-Max-style bike which acts as the gaming interface. Created from half an exercise bicycle, half an old Amsterdam bicycle and a bunch of wires and sensors - the physical bike allows users to cross dimensions and pedal inside the VR world. Wearing a modified VR headset, players sit on the interactive bike to pedal and steer inside the game world, and ring the bike’s special bell to unleash a defending carrotty’s blast.

Created in Unreal and experienced through VR platform, Oculus Rift, Bitmap Banshees was created and directed by Geoffrey Lillemon and Anita Fontaine, Creative Directors of the ‘Department of New Realities’ – a new creative unit within W+K Amsterdam that focuses on gaming, VR and experiential installations. To align the installation’s launch with Halloween, Lillemon and Fontaine worked with a dedicated team to bring the creepy installation to life in just two months.

On their inspiration for the game, Lillemon and Fontaine say: “We tapped into the year 2097 in Amsterdam, where living life in VR is a daily grind. The Bitmap Banshee's are digital avatars reeking havoc inside this warped future. ‘They’ - the Banshees, forced us to make this game as a teaser of what's to come, as we enter a new hyper- reality filled with avatars capable of crisscrossing dimensions.”

Bitmap Banshees launches tonight at a special event held in W+K Amsterdam’s public gallery space. Overflowing from digital into physical, the intense gaming experience is accompanied by a print exhibition with the game’s characters and collectibles turned into icons and exhibited in the gallery space. A natural progression to merge the real and virtual into a cauldron where hyper sensational dimensions dance together, Bitmap Banshees is part of W+K Amsterdam’s mission to define and creatively explore new technologies.

Mark Bernath, W+K Amsterdam Executive Creative Director, says: “Killing zombies on a rigged up old exercise bike with a weaponised bell somewhere in a dystopian future seems like a good way to start redefining our own future and explore the outer limits of what kind of creative company we can become. Making everything from video games to branded experiential installations using the latest in Virtual and Mixed Reality technology, New Realities reflects our desire to go as far out there as we can.”

Bitmap Banshees will be exhibited in W+K Amsterdam’s gallery until the end of the year. For those unable to visit Amsterdam, the game will be available online in the coming months.

For more information and a short trailer that portrays what it’s like to be inside the Bitmap Banshees world, click here.