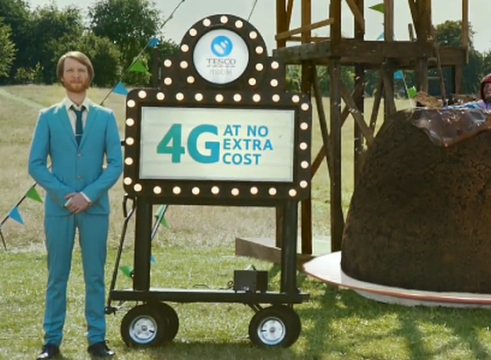 With offers and services so obviously a cut above the rest, Tesco Mobile doesn’t need to say too much. They have anytime upgrades, 4G at no extra cost and capped contracts for their customers. Enough Said. Leaving the brand plenty of time for a slice of entertainment instead of lengthy complex offers.

Launching across the UK today, Enough Said is the latest brand campaign from Tesco Mobile.

Created by Wieden+Kennedy Amsterdam, a series of three 30-second films bring the Enough Said concept to life. Each showcases the brand’s credibility and simplicity and states its brilliant offers up front; as there really isn’t any need to waffle on, Tesco Mobile uses the remaining time for a little bit of fun.

From a man who meets a desert from high velocity and becomes a human cherry, to a tap dancing flea named Ricardo, to a heavy metal parrot that blows a speaker. With offers that clearly speak for themselves why say more?

“We’re big fans of plain speaking at Tesco Mobile,” says Steve James, Head of Brand and Communications. “We get straight to the point in our latest advertising campaign with clear, simple messages about the benefits of our network all on the best selling smartphones and tablets. This means we can use the rest of the time to give viewers a bit of light hearted entertainment.”

The fun continues with targeted Video On Demand versions of the films further extending the campaign, along with online pre-rolls that actively encourage people to skip after Tesco Mobile’s offers are quickly covered off in the first few seconds.