W+K Amsterdam & Booking.com Encourage You to Wing It This Summer 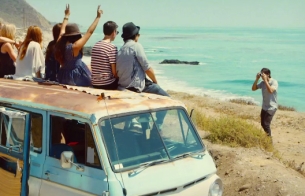 Booking.com, has launched an integrated campaign to encourage spontaneity this summer. With summer lasting only a few short months and with the season always over too soon, Booking.com wants people to get out there and make the most of it – to wing everything, except their accommodation.

Created with Wieden+Kennedy Amsterdam the campaign, which includes film, print, OOH, radio, digital and social activity, is all about the moment when you decide “Why not? Let’s go!” That exhilarating millisecond when you pack your bags, run out the door and book your accommodation after you’ve already hit the road. Because what lies ahead remains unknown - but one thing’s for sure, adventure won’t find you on the couch. It waits for those who #wingit.

Pepijn Rijvers, Booking.com’s Chief Marketing Officer, says: “Technology has revolutionized the way that we travel. With our current mobile apps and websites we can facilitate those wanting to wing it and be more spontaneous. Our best-in-class, last-minute availability at over 685,000 accommodations worldwide allows anyone, anywhere to experience one of the fun aspects of traveling: experiencing something new and exciting without some of the downsides that existed years ago. With our products, we’ll make sure you’ll always find the perfect place to stay, wherever you end up. Exactly why Booking.com is the must have app for every savvy traveller this summer.”

The centerpiece of the campaign is an online film that celebrates the sense of freedom and exhilaration of winging it and features on the campaign’s online hub. Tightly edited to a dynamic drum solo, the film is a jolt of energy that takes viewers on a journey from decision to destination, wrong ways, flat tires, frustration and all. Six-second micro cuts of the film also introduce Booking.com’s spontaneous summer message in a more abstract manner and will air on the brand’s social channels.

The campaign’s message is further communicated via distinct visual imagery that utilizes a double exposure layering technic to create a sense of momentum and demonstrate the energy of summer, with this imagery featured in OOH, newspaper and magazine cover-wraps, print and inflight placements.

Wieden+Kennedy Amsterdam Creative Director, Sean Condon, comments: “We’re very proud of this campaign. Although it’s somewhat of an executional departure from previous work, it has Booking.com’s typical energy, spirit and boldness. It also has a very distinct point of view on summer, a theme that all too easily dissolves into cliché. And the last time I heard an awesome jazz-fusion drum solo as the anchor of a brand film was… never.”

With users driven from social and digital activations, the online Wing It hub is a place where visitors can start their own spontaneous journey. Created with AKQA London, the hub allows users to input interests and information to wing their way to a spontaneous destination. Populated with curated content from real users, international travel influencers and the brand’s social channels, the hub will organically grow and update throughout the campaign period.

One influencer who will be featured on the hub is YouTube travel vlogger Louis Cole - a man who exemplifies the spontaneous traveler having been on the road and winging it since 2011. During the campaign Louis will create a series of films and posts that will feature on the online hub, in addition to also connecting with his and Booking.com’s fan base in real time Twitter interactions.

The Wing It campaign is live across the United States and United Kingdom now with additional markets due to roll out in the coming weeks. Fans can view the film on Booking.com’s YouTube channel and start their own spontaneous summer journey at www.booking.com/wingit now.