WIP Has a Solution To Trump's Late-Night Tweeting 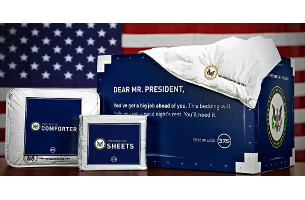 With President Elect Trump taking the world’s most demanding job, 37.5 Technology Sleep System has sent a personalised package to Trump so that he can have a better night sleep. In a letter to President Elect Trump, Cocona CEO Jeff Bowman states:  “To help you serve at your highest potential, we’ve sent you our 37.5 Technology Sleep System. Scientifically proven to keep you in the comfort zone longer than traditional bedding, the Sleep System will prevent you from getting too hot-headed at night—and hopefully during the day, as well. It might even inspire you to go to bed early and skip the late-night tweeting.”

Trump’s personalised package includes a box branded with the Presidential seal, as well as the 37.5 Technology sheets embroidered with the tagline “For Presidential Use Only.” As Inauguration Day has approached, the brand has started to tweet to Trump (as you can see here and here), letting him know he’s about to receive this special gift. 37.5 Technology will also tweet the package’s tracking number so that Trump – and the public – can check in on when the package arrives. 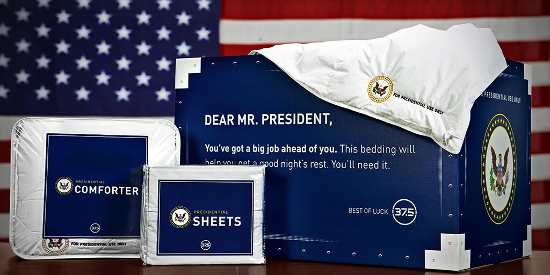 So what makes this bedding worthy for the most powerful man in the free world? A product of technology company Cocona, the 37.5 Technology Sleep System is scientifically designed to help your body stay in a comfortable sleeping environment. The patented 37.5 Technology includes active particles embedded in the fabric that accelerate evaporation if you’re warm, or retain heat if you’re cold. 37.5 Technology is confident that if Trump uses its Sleep System, he will get a better night sleep – and who knows, put a stop to the late-night tweeting! 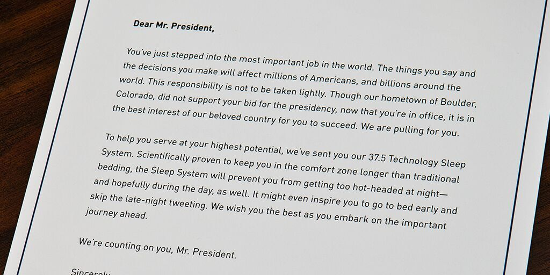 This activation for 37.5 Technology was developed by Boulder, Colorado-based ad agency WorkinProgress (WIP) which was founded last year by several Crispin Porter + Bogusky (CP&B) alum who were key players in the successful Domino’s Pizza campaigns. WIP’s AOR relationship with 37.5 Technology began at the start of 2017 and this activation is the first work to launch under the new partnership.