Winston Wolf Is Back in Business for New Direct Line Spot 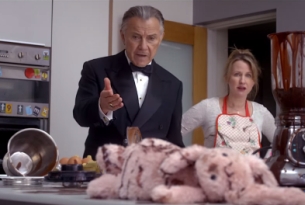 ‘Roger’, which promotes Direct Line’s Home insurance Plus product, follows the series of ads which launched in August 2014, in which Winston Wolf ‘fixes’ Britain’s insurance dilemmas with propositions from Direct Line that are designed to keep your life on track when you have to make a claim.

This latest ad continues the “fixer” theme, and sees Winston Wolf coming to the rescue of Jenny, whose chocolate fudge cake-making accident has broken not just her phone, but covered her daughter’s cuddly toy rabbit, Roger, with cake mix.

Wolf points out that Direct Line’s Home Insurance Plus cover will either give her cash, or a replacement phone – and then offers his rabbit-cleaning services to help her “get the fudge out of Rog”.

Wendy Pearson head of marketing at Direct Line Insurance, commented: “It’s nearly a year since we launched our first ads featuring Winston Wolf, and our latest instalment continues to challenge the insurance market in both its creative approach and by focusing on performance rather than price.”

Paul Silburn, the chief creative officer at Saatchi & Saatchi London group, said: “This latest ad shows that when you find yourself in a sticky situation, you really want Winston Wolf and Direct Line on your side."