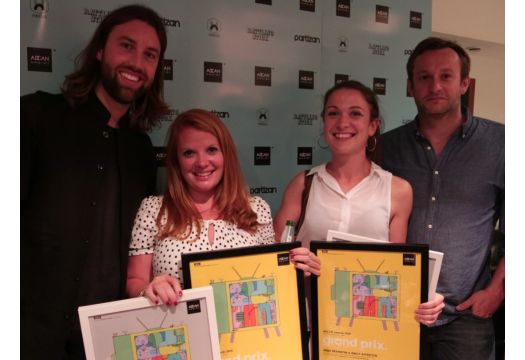 ADCAN Awards have announced Director Abbie Brandon and Producer Emily Atterton as the Grand Prix Award winners of the 2014 ADCAN Awards. The inaugural ADCAN Awards were held at the Oscar and BAFTA award winning Framestore, in London last night.

The free-to enter awards scheme, established in order to set up a creative platform to connect aspiring, non-represented filmmaking talent, challenged entrants to create a 30 second advertising film based on one of three online briefs from ADCAN’s chosen charities: Open Cinema, Engineers Without Borders UK and Learning Through Landscapes. Entries were judged based on their creativity, communication of the brief, production and entertainment value.

Abbie Brandon, Grand Prix Award winner, ADCAN Awards, says: “Emily and I are delighted to win the ADCAN Award’s Grand Prix prize. There are so many advertising awards that solely cater for big brands and are self serving, so it’s been amazing to be involved in the ADCAN scheme that rewards emerging talent and deserving charities. The ADCAN Awards have provided us all with fantastic exposure to industry experts and presented us with invaluable networking opportunities.”

Brydon Gerus, Founder, ADCAN Awards says: “When we set out to create the ADCAN Awards we had three goals: to show that advertising can be a force for good; to create a positive space outside the usual industry award show circuit; and to provide a genuine and effective way for new talent to break into the industry. Last night we checked all three boxes and we couldn’t be more pleased. We are so impressed by the calibre of work submitted and offer huge congratulations to our winners and all those shortlisted this year.”

Juno Hollyhock, Executive Director, Learning Through Landscapes says: “We have thoroughly enjoyed being involved in the ADCAN Awards. We have met such promising film-makers that have gone to the trouble to make our charity come to life and we are so impressed by their talent. Abbie and Emily have provided us with an amazing tool to continue to be a catalyst for change. To have them take our mission and vision, and create a 30-second film of something wonderful that tells the world about us is a dream come true.”

As well as having their films promoted on Vimeo, the nine shortlisted entrants won the opportunity to attend workshops with leading creative professionals to help further develop and support their talents and connect them with industry leaders. Workshops with Rattling Stick,Partizan and Nexus took place on Thursday 7 August, and a second day of workshops, featuring sessions from The Mill (post), Wave (sound), Work (editing) and Arri Media (camera work) will take place throughout today, Friday 8 August.