Wimpy's Mr Cuddles is Back in New TVC from FCB Johannesburg 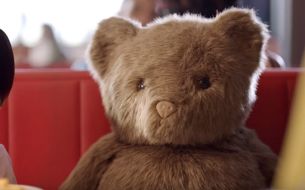 Mr Cuddles, best friend of one of Wimpy’s cutest customers ever, is back in a new television commercial for the iconic South African family restaurant.

This time around, the family is enjoying ‘The R49.90 Burger Shake Combo’ when the young girl reminds her dad of the occasion he blamed her very furry and very mute companion for his bad manners. She confidently informs him that ‘It’s payback time’ and slides his milkshake across the table to stand alongside her plate. Dad tries to deflect her attention and slide the milkshake back but she’s too smart for that; and dad has no choice to give in to her and Mr Cuddles.

According to Wimpy Marketing Manager, Luise Peters, the main objective with the promotion was to bring stalwart Wimpy friends and families together with a value-for-money offer that would reward their wallets. A secondary goal was to entice new customers to experience that ‘unique live every Wimpy moment feeling’.

“By combining several of Wimpy’s most-loved and often-purchased offerings – the iconic Wimpy Burger, the truly famous Wimpy Chips and the totally indulgent Wimpy Classic Milkshake – in a really well-priced, low-cost deal, we believed we would encourage consumers who have not experienced the brand in action before to try it. And, of course, the iconic Wimpy Experience would then win their stomachs, hearts and minds,” she said.

Produced by Egg Films and directed by Dani Hynes, the ad will air for six weeks on DSTV, SABC and ETV channels. ‘The R49.90 Burger Shake Combo’ will also be promoted with national radio and out-of-home elements.

“Each Wimpy execution strives to allow Wimpy’s pay-off line – ‘Enjoy every moment’ – to come alive for those South Africans who enjoy sharing good food and good times with their friends and families,” commented Suhana Gordhan. “For this new TVC, we once again enjoy the playful repartee between Dad and daughter that we’ve come to know. The result is warm and endearing - a charming reminder that Wimpy offers up the best environment and great value for a lovely family outing,” she said.